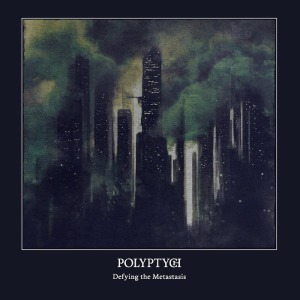 It’s not even June yet, but let’s go ahead and call it in the air: For those of us into music of the heavy and angry sort, 2016 is death metal’s year. While 2015 offered some scattered gems, death metal of all sorts just came roaring out of the gate from the beginning of 2016. Chicago-based Polyptych add to its formidable ranks with their third independent album, Defying the Metastasis, which continues the year’s progression in technical, forward-thinking death metal that is not short on brutal riffs, unorthodox songwriting, and an inventiveness that establishes them as a distinct voice in a very crowded (but excellent) scene.

Technical death metal seems to be a hot ticket item this year, but fortunately for listeners, it’s very easy to pick apart excellent tech death from mindless masturbatory soloing and triggered gravity blasts. In the case of Polyptych, their chief strength is being able to construct a sound that is methodically measured, intricately written, yet for all its moments of musical geekery and unorthodoxy, still delivers the goods with a thick, nearly blackened atmosphere and a twisted sense of melody and groove to inject some balance to the madness here. The best Example A of this is “Coalescence,” in which a doom-like rhythm is interspersed with frantic tremolo picking and carefully chosen natural harmonics before dropping out entirely to make way for a brief, haunting clean arpeggio. And then all hell breaks loose. Rapid-fire dissonance swims over top of blasts of percussion, eventually transitioning into a blazing finger-tapped solo and a hypnotic, ascending/descending riff. The bass weaves melodic lines all its own – a focal point of the album as a whole – and a dizzying array of tempo shifts complete the package, but none of the transitions ever feel showy for their own sake.

To get the customary comparisons and analogies out of the way, Defying the Metastasis strikes with the ferocity of Hate Eternal, the bending song structures of Gorguts and Atheist, but a progressive, atmospheric injection not unlike what we’ve heard this year from outfits such as Zealotry. The main difference with Polyptych is that the chaos feels more reigned in on Defying the Metastasis, and that’s a compliment. The drum performance in particular is insanely tight and hard-hitting, yet refined and tasteful with its application of fills and shifts of meter. Similarly, the dueling guitars find a brilliant counterbalance of dissonance to melody, often using one to resolve the other, namely on the closing title track, where phased-out clean guitars and harmonics echo over swarming, swift currents of rhythm guitar and relentless drum work.

For all of its progressive notions, though – most apparent on the brilliant “Feral Mind, Abstract Tomb” and maze-like structure of “Crimson Halls” (ha, look what I did) – there are still some absolutely crushing straightforward moments here. “Windswept Fragments” utilizes dizzying leads against a hard groove split up with frantic drum fills, while the opening of “Triumph of the Swine” channels primal death/thrash before swirling into a vortex of buzzing guitar runs and some of the album’s heaviest grooves, underpinned by the brilliant bass lines. “The Decadent’s Mirror” is another track revolving around the bass lines, resolving in a hefty, hammering breakdown that recalls Decapitated but maintains the dark, hazy atmosphere of the album’s remainder. Polyptych seem to have distilled the current interest in both atmospheric and technical death metal into one monster of a release, and it’s difficult not to say that Defying the Metastasis will end up as one of the best death metal albums of the year, or at the least, to contribute even more treasure to a growing heap of excellent death metal in 2016.

Polyptych offer a slightly different and cleaner take on the technical death metal that is such a hot item this year, and Defying the Metastasis is absolutely a standout amidst the saturated death metal scene, even with so many excellent releases. Their masterful blend of the progressive, the rhythmic, and the brutal makes them stand out from many of their peers, and Defying the Metastasis demands listeners’ attention that it so rightfully deserves.

Defying the Metastasis will be released independently on 05.13.16 and is available for pre-order. For more information on Polyptych, visit their Facebook page.