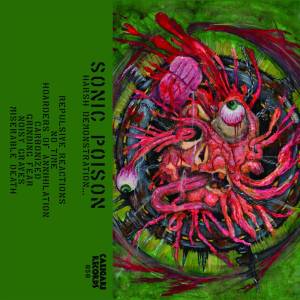 Since Repulsion obviously aren’t making another record it falls on bands like Finland’s Sonic Poison to carry the torch. And they do it extremely well on their demo, Harsh Demonstration. It’s not a long drawn out affair either, the band get in and get out in under 10 minutes but there’s no letup to their savage display of grind, death, and d-beat. Great music to bang a few whiskeys down to, I mean it is Saturday after all.

The metal consuming public in general has been exposed to all kinds of genuinely thrilling stuff throughout the first half of this year. You’ve got all sorts of atmospheric doom, experimental death metal, and phenomenal black metal but sometimes it’s nice, no, essential to hear something that blasts like it’s 1989. In case you didn’t already pick up on it, this is one of those records. If you’re one of those that likes death infused grindcore you won’t be hearing anything totally new but what you’ll get is a grin inducing earache along with some strained neck muscles and possibly some broken items around the house.

Keep in mind this thing is full speed ahead from start to finish, but the tastiest riffs come on opener “Repulsive Reactions”. It’s a sprinkling of early Terrorizer and a heavy dose of Napalm Death. Bass is generally an afterthought with this kind of speed but the opening bass chords of “Hoarders Of Annihilation” trick your mind into thinking of doom metal but rest assured the violence comes quickly. “Grinding Fear” is straight up Repulsion worship and as for me, I have absolutely no problem with it. Mainly because it’s done so well — inhuman drumming that at times leans on a d-beat groove, not to mention the guitar playing is insanely fast. But it’s the vocals that create the most resemblance, if Scott Carlson ever needed a stand in, this vocalist is his man.

The ever awesome Caligari Records has released this on a limited run, puke green cassette. Even the artwork is a throwback to the early days of death metal when shock value still meant something. Caligari is known for exactly the kind of wonderful underground extremity that this album contains. Of course you can stream it on the labels bandcamp page but go buy the cassette. What? You don’t like tapes? Well, you do like labels that carry all sorts of skull crushing metal — go support so they can continue to make us all happy. I promise you won’t be disappointed.

The good thing about Harsh Demonstration is, even if you think it doesn’t appeal to you it will only take up the same amount of time as a typical doom song so go ahead and give Sonic Poison a shot. And if the mention of quality throwback death/grind evokes a reaction then I highly suggest picking this one up. We’ve been touting the Finnish scene for sometime now and this quick gut punch of an album is yet another reason why.