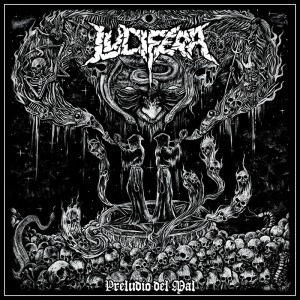 Colombia’s Lucifera got their start in 2008, split once then reformed and as of February 24 will be releasing their third full length, Preludio del Mal (Morbid Skull Records) which is twelve tracks of vicious blackened thrash metal. It shares the same kind of vitriol Sarcofago spit many years ago but also shares an early Venom vibe in the sense of speed and a lo-fi, almost organic sound. Further making this album a must have offering is the way the band intertwines melodic passages yet still manages such an explosive and sinister feel. Today we have an exclusive stream of the fourth track “Alianzas de Acero y Metal” (translated: steel and metal alliances) which is a perfect example of the kind of furious speed and memorable songwriting the band is capable of. And those vocals from Alejandra Blasfemia, sung in the bands native tongue, are primitive and deadly lending perfectly to the whiplash nature of the song as well as raising the ferocity level several more notches. Don’t wait any longer, jump in and have a listen.

For more information on Lucifera visit their Facebook page.