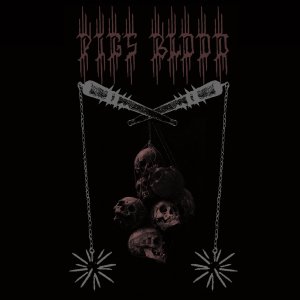 Behold Pig’s Blood, now signed to Godz ov War Productions.  The band is releasing their debut full length Pig’s Blood after much fanfare accompanied the release of their demo last year.  The band never compromises on brutality, playing death metal of high caliber.  If you want death metal with plenty of blast sections playing to the accompaniment of downtuned rhythm guitar, Pig’s Blood are worth the price of admission.  Far more than that, these guys know how to make death metal straightforward and fun to listen to.

There’s plenty of shredding and blasting on this album.  With elements of dark death metal, brutal death metal and plain, simple old-school death metal, Pig’s Blood is perfect for a sojourn into an abattoir for a meditative contemplation of violence and societal perversion.

The band varies the tempos just like most bands do.  The songs aren’t simply comprised of blast and stop two-minute wonders, and the riffs are dark and catchy enough for a soundtrack at a facility for the criminally insane.  They are a lot like Miggs from Silence of the Lambs fame, showing a remorseless lack of empathy for humanity and women in particular, masturbating in his cell and throwing discharge at Jodie Foster in his only cameo in the movie before Hannibal Lecter talked him into swallowing his own tongue.  That sort of brutality is what must inspire this four-piece from Milwaukee, Wisconsin.

The music on tap is perfect for fans of violent metal and insanity.  Caution goes out to all interested party, as this is NSFW for the life of your co-workers who might think that the office is under attack by psychotic murderers with carving knives and chainsaws.  “Truly sick,” is what some people like to describe this music, so if Grandma gets to check out what you’re scrobbling on Last.fm and she gets a load of this, don’t ask for an apology.  You have been warned.

Per chance if you picked this up on the way to your favorite library, pick up some noise-cancelling headphones to keep the library patrons from decking the librarian moshpit style.  It’s safe to say that after their demo floored me and I happily admitted to being a fan of the band, they absolutely take all complimentary reviews and refuse to let up in intensity, writing their most compelling music to date on this full-length release.  I recognize one track from the demo here, but most of them are new songs, so support Pig’s Blood in favor of bands who don’t cut the mustard.  Death metal fans on Nine Circles are guaranteed to swine and dine to the tune of Pigs Blood’s self-titled album.

Godz ov War signed this band after their aforementioned demo was released last year, and dare I say that this is the label’s most riveting, exciting release yet.  Come hand-in-hand with the first necrophiliac you can find and play this music on a trip to a graveyard.  Necrophiliacs and a tub full of disinfectant sold separately.