Drug Honkey are a doom quartet from Chicago. The band plays a unique mix of doom, death metal and sludge and have released four full length albums since forming in 1999. A couple months ago they released their latest, and fifth full length album, Cloak of Skies via Transcending Obscurity Records. I recently spoke to guitarist Gabe Grosso (Hobbs, guitars) about the album, guest features and more so read on to see what he had to say. 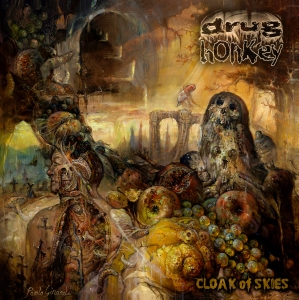 Your recently released fifth album, Cloak of Skies is one of the most twisted and soul crushing releases I have heard this year. Tell us a bit more about the album.

After the release of Ghost In the Fire we decided that we should follow up with what would’ve been our first official studio EP. “Ghost” was very well received and we were excited to follow up with some new ideas. In the past we were more about improv, as standard song writing was not something we did regularly. At the time, our recording process was simple.. just hit record and let her rip! 100% pure improv until we captured something we liked, then we would go back and layer from there if necessary. This was pretty much the basic formula for the first couple records. With “Ghost” we actually began using a few basic preconceived ideas and riff arrangements, but it wasn’t until now on “Cloak of Skies” where we actually wrote and arranged half of the songs on the album. For me as the guitar player, I was pretty psyched about this, as I already had some great riffs in the arsenal and some song ideas that I’d been wanting to use. I began recording songs on an old 8 track to bring to rehearsals and show the guys. That coupled with some great riffs Gillis came up with, and a few tweaks later we had what would ultimately become “Pool of Failure,” “Outlet of Hatred” and “The Oblivion of an Opiate Nod.” At around that point I guess we had become so psyched about these songs that we decided “fuck it,” let’s just do another full length. While these newly crafted songs were great in our minds, it was also important for us to stay true to what really defined our sound in the past. We locked the studio door and proceeded to do what Drug Honkeys do, and 2-3 hours later we had what would become the other half of the album; “Sickening Wastoid,” “(Its not) The Way” and “Cloak of Skies.” All recorded on the fly and in one long take. Those 3 were the best, so we just continued to work on them from there. We couldn’t have been any luckier to have Justin Broadrick willing to do a remix of the opening track to bring the album to completion.

Your music is a potent mix of doom and death metal wrapped in a claustrophobic atmosphere. How did you develop your unique sound?

Drug Honkey began as an electronic studio project between Paul (Gills, vocals/synths/samples/FX) and Adam (Smith, drums) originally. Paul having always been a local heavy hitter in the Death Metal scene and Adam from the Drum & Bass/Rave scene gave the early Honkey material a unique edge right out the gate. By the time Paul and Adam were ready to take Drug Honkey into a more live, instrumental direction they asked me to come on board. Already long time friends with Paul, it wasn’t even a question when he asked.. “Fuck ya I’m in and I only have 2 questions.. What the Fuck is a Drug Honkey and what do I gotta do to become one”?! Haha! As a guitar player I was heavily influenced (at the time) by the experimental alternate tunings used by Kim Thayil of Soundgarden and really into all the slower heavier shit coming out at the time. Along with the addition of Jason Sneed on bass we all incorporated what we had to bring to the table and ultimately this let to “Hail Satan.” As we continued to develop our sound one key element has always been the “atmosphere” of our music, and a large part of that comes from what Paul adds with his keys, samples etc. There aren’t a lot of Metal bands doing this and I don’t know why because it opens so many doors for what can be done musically in my opinion.

The album is a progression of the material on your previous albums. What was the recording process for the album? Did you try anything different this time around?

In the past we would record every rehearsal and everything we did was improv. Periodically we would listen back to these recordings and when we felt that we’d stumbled upon a “diamond in the rough,” we’d start multi-tracking on top and see what developed. This really was a fun and very unique way of recording for us, and quite honestly if it weren’t for this (Paul and Adam inspired) approach we never could have come up with some of our very best material. One of our most popular YouTube videos “Heroin” was recorded this way.. as well as the very well received, and personal favorite of mine “Sickening Wasteoid.” We always recorded in Paul’s Everflow studio (aka The Honkey Hole), but this time around we opted to record in Adam’s SOS Studios and while all of our albums have a unique sound, I personally couldn’t be happier with the end result of “Cloak.”

The album features appearances from Bruce Lamont (Yakuza, Corrections House) and Justin K. Broadrick (Godflesh, Jesu). How did they become a part of the album?

We have always been an experimental band and open to trying new things (obviously). Bruce Lamont is a part of our home town scene here in Chicago, very well known and respected in the scene. The idea for adding a sax track to one of our songs seemed like a promising idea. I believe it was myself who originally suggested the idea, as Paul knows Bruce personally, so we invited him to track with us – he said yes and the rest is history.

Justin Broadrick (Godflesh, Jesu, and pretty much everything else he’s been a part of) — we are all big fans here at the Honkey Hole! Asking him to remix a Honkey track was a no-fucking-brainer. The only question was, would he be interested??? Paul, having already met and hung with Justin a few times before, contacted him and to our utter excitement he was ready and willing!

I come from a very musical family and both of my parents are exceptional musicians. As far back as I can remember, my folks were always playing together, or with friends at picking party’s at our house. I grew up listening to lots of Folk music, Americana and Blue Grass. My parents were great! They never forced it on me, but the seed was planted early on so, when I was finally ready to rock.. they embraced it. Although I wasn’t interested in Folk Music it didn’t really matter. They put up with a basement full of drum sets, bass and guitar full stacks, volumes turned to 11, rattling chandeliers, bass rumblings, and probably some plaster cracks.. they put up with it all!!! My two younger brothers became great musicians! Adam has a Masters in music and has toured all over the country, and my brother Mike has become an accomplished vocalist and guitar player. To this day we all play together at least once a year at the Camp Euforia Festival in Iowa as The Grosso Family Band. My two brothers and I often play together as the Grosso Brothers Band which focuses on our favorite old school Grunge Rock covers from the early 90s.

As far as success level is concerned.. I am very happy with what we have achieved with Drug Honkey. We were invited to play Roskilde Festival in Denmark a few years back which was incredible and something I never thought we’d get to do. Our fan base has definitely grown considerably since the latest record dropped, and have made lots of new connections via Facebook, etc. If we get invited to play Roadburn next year then I could definitely say I’m satisfied with our success level!

When you’re not listening to, writing or playing metal, what are some of your favorite albums to listen to currently?

I’m into a lot of different stuff musically besides Metal, but currently I’ve been listening to lot of early 90s Alt Rock and Grunge due to the fact that my brothers and I recently started a cover band focused on that type of stuff. Soundgarden’s “Badmotorfinger” and Alice in Chains “Dirt” being 2 of my favorite Grunge records. I’m also super into a lot of the old school gangsta rap from around that time frame and earlier also. My absolute hands down favorite rap record being Ice T’s “O.G. Original Gangster,” which never seems to get old for me, and of course “Straight Outta Compton” by the legendary NWA.

One of the great things happening in Metal in our home town of Chicago specifically, is that a lot of our local venues have really started embracing the scene. 10 years ago there were only really a few options for extreme music shows, but now venues all over the city have at the very least “Metal Nights.” I think that the smarter clubs have come to realize the fact that Metal heads love to drink beer and a shit ton of it, so it really makes smart business sense. One of the worst things happening is all these new bands just playing the same old shit and trying to copy what’s already been done to death. Especially Doom in recent years with all the wizards & witches bands ripping off old Sabbath riffs, and singing about the occult and all that shit. It’s all been done to death and I don’t understand why most bands are scared to try something new. Another “worst” is that there seems to be a big lack of successful bands supporting other newer up and coming groups. It’s very cliquish especially here in Chicago with a lot of ego bullshit, but I guess that’s probably the same anywhere else in the music scene.

Focus on the review itself and give details on why or why not it’s a great release. Too many critics focus on the creative writing aspect of a review instead of the record itself. Feedback whether good or bad is something I like to hear in detail myself.

You are doing an album release show next month with Faces of the Bog, Cokegoat, & Boatman’s Toll. Do you have any more shows planned in promotion of the album?

Not at the moment, but if the right opportunity presents itself, we would definitely be willing to do more shows. It’s much harder to draw a good crowd when you’re playing all the time.

Many thanks to Gabe for his time!

Cloak of Skies is available now on Transcending Obscurity Records. For more information on Drug Honkey visit their Facebook page.

One thought on “Interview: Gabe Grosso (Hobbs) of Drug Honkey on “Cloak of Skies,” Guest Appearances and More”