Receiving the Evcharist is our weekly feature where we pair choice albums with our favorite libations. Drink from the cup of heresy. This week’s offering: Slugdge’s Esoteric Malacology and Burial Beer Company’s Skillet Donut Stout. 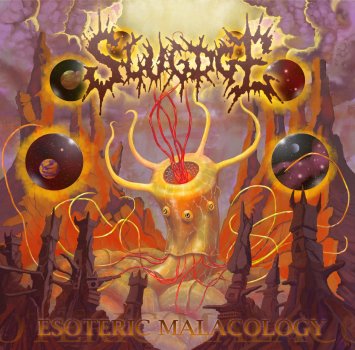 By the mucus-encrusted pneumostome of Mollusca! By now, countless gallons of digital ink have already been spilled across the metal blogosphere in praise of the Greatfather — and for good reason, as this long-awaited tour de force, which I already included on my list of hotly anticipated albums all the way back in early 2017, is an absolute joyride through the slimy nebulae. Esoteric Malacology builds on the already-formidable foundation of 2015’s Dim & Slimeridden Kingdoms by doubling down on massive riffs, countless hooks, surprise turns and inventive progressions. Slugdge is one of those rare specimens who sound unnervingly familiar — the melodic genius and snark of Heartwork-era Carcass here, the relentless assault of Napalm Death there, and Anaal Nathrakh’s operatic pomp and aggressive awe elsewhere — yet possess an immediately recognizable, unmistakably unique sound. Testament to Slugdge’s songwriting chops and consistency in excellence, I’ve witnessed numerous faithful servants of Mollusca say that their favorite song of the album changes constantly. That already should convince you of the assured destruction Esoteric Malacology will eventually wreak on EOY lists. Praise be! 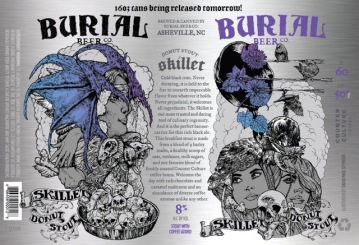 Based in Asheville, NC, Burial Beer Company has for some time impressed and pleased yours truly with their metal-approved can aesthetics (majestic hails to David Paul Seymour, the artist behind them) and a tasty torrent of impressive high-quality releases. As a zealous lover of stouts, I am happy to announce that their seasonal breakfast stout (available twice a year) Skillet Donut Stout is an exercise in delightful perfection that packs a wallop, thanks to a blend of nine barley malts and a harmonious combination of molasses, milk sugars, and Counter Culture coffee beans. Jet-black and opaque, rich and delicious yet with a surprisingly light mouthfeel, and to be enjoyed any time of the day. Skillet brings the pleasure with a delicious crema of espresso that goes hand in hand with splendid roasted glory and a blissful dash of lactose. Unlike other beers claiming to do so, Skillet tastes like actual, honest-to-god fresh donut, further bolstered by sweet layers of chocolate, caramel and sweet molasses. This is the breakfast of metal gods. Go forth and hoard every can you can find.

I wish you a weekend full of conquest and victory. Brother Vincent will return next Friday and has promised a three-point landing dressed only in a bullet belt. In the meantime, stay tuned, don’t blink and ready your high-definition visual recording devices.

2 thoughts on “Receiving the Evcharist – Slugdge and Skillet Donut Stout”