Arrogant Destruktor have been busy putting out teasers since their inception in 2011 but have recently unveiled their debut full length, Commandments of War and Necromancy, which sees the duo tighten their ferocious early wave black metal chops. Their 2014 compilation Amidst the Blackest Void was raw, fierce and untamed —- all qualities black metal purists love to hear. However, this time out they’ve taken all that energy and channeled it into an even bigger beast but with better production and a fuller sound that takes advantage of their knife edge style. The album is out digitally and on cassette and will be released soon on CD by Total Death Records. In the midst of these releases we had the opportunity to ask the band our set of Profile questions so head inside to see what they had to say and be sure to grab a copy for yourself. 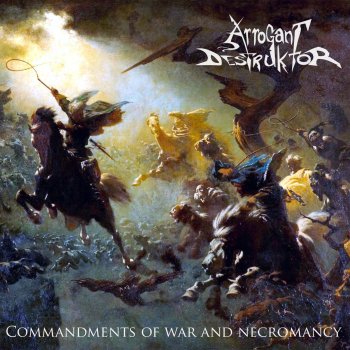 I’ve been playing in bands for years but Arrogant Destruktor formed in 2011 when I met Andy at work and we decided to work on some material. In terms of success, making music that we want to listen to ourselves, to us that is a success, and we are very happy with the new album so maybe we have succeeded in that case.

We don’t play live so we don’t have any funny stories in that department, although we have had some offers of live shows in UK and Europe so that may change in the future.

The resurgence of the cassette format is great, and our new album has already been released as a limited edition cassette so it’s cool that there is an interest. I think the worst thing in the black metal scene nowadays is too much quantity over quality when it comes to bands. The standard is pretty low, anyone can make some shit in their bedroom and release it on the internet.

We are not against bands expressing socio/political views within their music and lyrics but we prefer to write about standard black metal themes.

I’ve been listening to metal for as long as I can remember, I got into the tape trading and underground scene when I was 13 so I don’t remember anything different.

I think zines are still important, whether online or printed. I like old school printed zines the most but there are also good online ones such as Ave Noctum for example. I like zines or reviews where the writer has personality that comes through, I prefer that than texts written in perfect English but have no personality in them.

As far as we are concerned we already have a cult as we have black metal maniacs contacting us from all over the world! As far as hobbies goes music is all I’m interested in and I go to a lot of shows as well.

I listen to lots of different styles but at the moment Master’s Hammer’s latest is on heavy rotation, also Judas Priest Firepower. I’ve been listening to lots of hardcore/punk like Gauze, Cro Mags etc and some more progressive music. A.T. is really into the new Abigor album too.

Our new album Commandments of War and Necromancy will be released soon on CD on Total Death Records. It’s already available on cassette from Blackwood Productions, both the CD and tape will be able to buy directly from ourselves too, we will also be releasing the promo video for “Born of Mountain Mysticism” very shortly. We have the music for maybe 5 or 6 songs ready for the next album so we hope to get that recorded in the next 12 months. Maybe we will eventually play live if the offers are good enough.

Many thanks to Arrogant Destruktor for their time!

Commandments of War and Necromancy is available digitally on Bandcamp, on Cassette via Blackwood Productions and on CD soon via Total Death Records. For more information on Arrogant Destruktor visit their Facebook page.