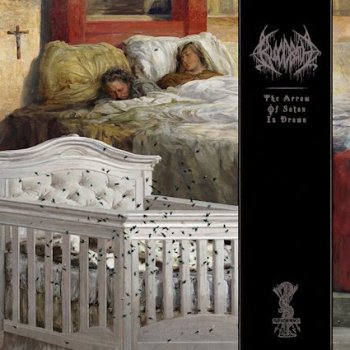 Like many I suspect I was drawn to old school death merchants Bloodbath via their connection to Mikael Åkerfeldt.  Since debuting with the classic EP Breeding Death the band have gone through a myriad of tweaks and changes to both personnel and sound, coming out the other side with perhaps their strongest lineup and album in The Arrow of Satan is Drawn.  Harkening back to the early classic Swedish death metal formula without being slave to it, the album drips with a nasty, nauseating vibe that reinforces the band as much more than a “supergroup.”

Since joining up with 2014’s Grand Morbid Funeral Nick Holmes has proven to be a juggernaut for the band on vocals.  Far from his unique delivery as part of Paradise Lost, Holmes channels a blasphemous growl throughout The Arrow of Satan is Drawn that feels viscous and diseased, just short of reaching through your headphones and bestowing a plague on your soul.  “Levitator” lurches with a crippled grace, the chainsaw riffing cradling his delivery of lines like “Infected burial mound / Ecstatic suffering / Transcend to netherworlds / To crown our vile king” for maximum clarity – a huge feat when it also sounds like your gargling ashes.

Elsewhere the hooks are plentiful and apt to pierce you at a moment’s notice.  The core band of Martin Axenrot, Jonas Renkse, and Anders Nyström continue to craft razor sharp songs, this time abetted by Joakim Karlsson from Craft on guitar and it brings mid-album songs like “Deader” and “March of the Crucifiers” to another level.   That’s something I wasn’t expecting about The Arrow of Satan is Drawn: it gets stronger and more cohesive as you travel through its Stygian depths.  Which is no slight on opening tracks “Fleischmann” and “Bloodicide” – it’s just that the farther I go into the album, the more the twists and turns of each song stick with me.  Move through enough hooks and their barbs will refuse to release you, and this album proves that.

Is it hogwash or hyperbole to count The Arrow of Satan is Drawn as Bloodbath’s best album?  Having moved beyond affectionate tribute to a foundational style (although in re-listening to the album now “Warhead Ritual” is a gem in the same vein) it feels like the band has carved a vital slice of death metal territory they can execute on perhaps better than anyone else at the moment.  Dark, dank, and awash with buzzing flies The Arrow of Satan is Drawn has broken the earth to rise just in time for end of year consideration.

The Arrow of Satan is Drawn will be available October 26 on Peaceville.  For more information on Bloodbath check out their website and Facebook page.

One thought on “Album Review: Bloodbath – “The Arrow of Satan is Drawn””