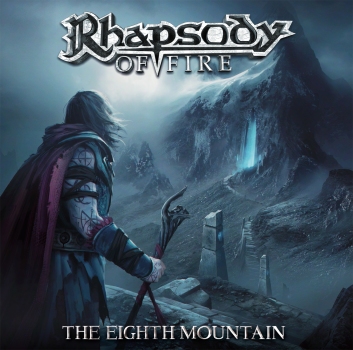 And so it was written…Rhapsody charged the plains of battle out of Italy, begetting symphonic power metal the likes of which had never been seen.  But lo, the Beast of Trademark trampled forth, and thus Rhapsody begat Rhapsody of Fire, which continued to blaze the sky alight with neoclassical lightning from the fingers of Luca Turilli and the gilded vocal cords of Fabio Lione.  But Fate is a fickle mistress, and in 2011 Turilli left to form…Luca Turilli’s Rhapsody, leaving the original Rhapsody, now called Rhapsody of Fire, to continue the charge.  Except that Fabio Lione left in 2016 and is now forming a new band with Luca Turilli called…Turilli/Lione Rhapsody?  It boggles the mind, but fear not, for the original Rhapsody, now called Rhapsody of Fire but missing almost all its original members is still here, and the amazing thing of it all is that their latest album The Eighth Mountain is not only good, but it kicks all sorts of power metal ass.

It’s a confusing lineage to be sure, and sure…I may have written about in a bit of a cheeky manner, but the fact remains that regardless of the iteration, the massive entity that is Rhapsody has been leading the way in symphonic power metal and The Eighth Mountain shows that not a step has been lost with all the changes in personnel.  The band have long mastered the art of the galloping riff, the ethereal keyboards that support the anthems, and the killer hooks that anchor the choruses to the ground even as they soar to the heavens.  Any doubt this would change with the loss of Lione are immediately erased with singer Giacomo Voli’s entrance on “Seven Heroic Deeds.”  Having previously sang on the re-recorded compilation Legendary Years this marks his first real opportunity to contribute lines not already made famous by Lione.  His pitch is higher, losing a little of the fullness Lione carried, but there’s a sharper attack and no doubt he can hit the notes he needs to lead the band forth.  It also helps that the song is mercilessly fast and aggressive, showing the band’s chops have lost none of their edge.

From there The Eighth Mountain proceeds pretty much in exactly the way you want from a Rhapsody of Fire album.  From the intro “Abyss of Pain” to the fifth track “White Wizard” the pace barely relents.  Things take a medieval folk turn on “Warrior Heart” and I’ll admit it’s typically in these quieter folk moments I tend to get lost and unfocused, but arrangement allows for some rousing choruses to keep it from falling flat.

The second half of the album picks right back up with “The Courage to Forgive” and there’s some Maiden moments to balance out the heavy keyboards.  Epics are plentiful in the great “March Against The Tyrant” and closer “Tales of a Hero’s Fate.”  In fact, these tracks coupled with the burning speed of “Clash of Times” have me leaning toward the second half being a bit stronger, as it relishes its 80s influences even as it utilizes a strong modern production to allow every riff and arpeggio to hit you square between the eyes.

If The Eighth Mountain proves anything, it’s that by now Rhapsody of Fire is an institution, one that refuses to relinquish the crown of epic symphonic power metal.  And the news that this is the first segment of a new series called The Nephilim’s Empire Saga is even more reason to be excited for what’s to come.

The Eighth Mountain is available now on AFM Records.  For more information on Rhapsody of Fire check out their website and Facebook page.

One thought on “Album Review: Rhapsody of Fire – “The Eighth Mountain””