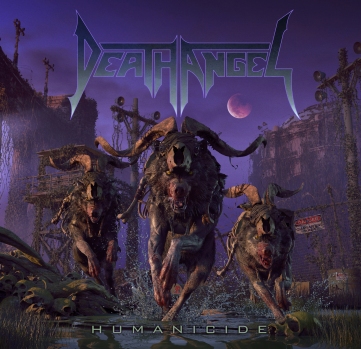 The joke is that thrash never changes.  It is what it is, and its steadfast adherence to the tenants of its genre are what make thrash, well…thrash.  And over the course of the six albums released during their re-emergence, Death Angel continue to hold fast that line of blistering precision and aggression, with new album Humanicide fitting comfortably in with their previous output.  Maybe consistent is a a more apt descriptor, as there’s little to differentiate any of the songs from previous albums, but when the quality is this high that’s hardly a complaint.

It’s hard to capture just what it was like when The Ultra-Violence came out in 1987.  As every other thrash band was trying to emulate the Big 4, Death Angel blasted out with an almost punk vibe to their brand of progressive thrash riffing. Rob Cavestany’s ridiculous lead playing was immediately apparent, but the wide vocal range we’ve now come to expect from Mark Osegueda was more of a nasty, open sore of a scream, hitting on these brutal sing song cadences that spoke to hardcore and sneering punk as much as it did the more dramatic moments of Joey Belladonna.  It was a vibrant clash against the multi-art mosh epics of tracks like “Thrashers” and the 10+ minute title track.  As the songwriting congealed and expanded through 1988’s Frolic Through the Park and particularly 1990’s Act III the sound of what would come to define Death Angel coalesced.  When fourth album The Art of Dying emerged 14 years later, “Thrown to the Wolves” made the immediate point that nothing had changed except the band were sharper in their attack.

Humanicide continues that trend.  The songs are tighter, the production is honed to a cold, dispassionate edge, and the anger is readily apparent across the entire album, with songs like “Divine Defector” and “The Pack” putting some serious rage into the mix.  “I Came for Blood” has old-school written all over it, and shows the kind of variety Cavestany still brings to the table as a songwriter.  When he has the band (at this point a solid unit for a decade) firing on all cylinders on monsters like “Agressor” and “Ghost of Me” it’s hard not to just immediately fall into rabid worship.

There are a few small moments where that momentum flags a bit.  “Immortal Behated” is a great song title, but feels a little too beholden to mid-paced single crafting despite that great guitar riff in the chorus.  Likewise “Revelation Song” which serves to provide a bit of respite but doesn’t give quite the same punch as the tracks that surround it.  Positioned as a bonus track, “The Day I Walked Away” is very different, hearkening back to the band’s experimentation in their early days.  Spoken lyrics and spacious guitar work that pans wide help set this apart from the album proper.  Whether it completely works is another matter, it’ll be really interesting to see if Cavestany can incorporate some of the ideas into future albums rather than relegate it to bonus track status.

Does thrash need to change?  Death Angel makes a strong case for leaving well enough alone, and Humanicide is ample evidence that if something ain’t broke, no need to fix it.

Humanicide is available May 31 on Nuclear Blast.  For more information on Death Angel, check out their official website and Facebook page.