Receiving the Evcharist is our weekly feature where we pair choice albums with our favorite libations.  Drink from the cup of heresy. This week’s offering: Witch Vomit’s Buried Deep in a Bottomless Grave and Modern Times Brewery’s Critical Band IPA.

The Metal: Witch Vomit’s Buried Deep in a Bottomless Grave 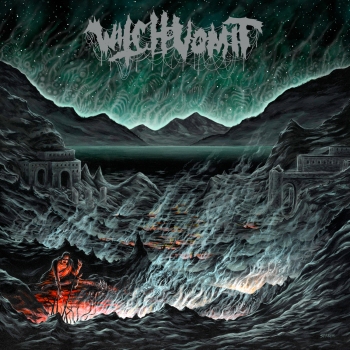 We are back again today to complete the trifecta of 20 Buck Spin’s August releases I took upon myself to pay lip service to.  This time around is Witch Vomit’s latest full-length Buried Deep in a Bottomless Grave, an album that I’ve been hotly anticipating since XXBS released the Poisoned Blood EP back in 2017.  Fans of that album, and who are familiar with Witch Vomit prior to that release, should know what to expect here; where Cerebral Rot built momentum up from creeping mid-tempo passages, Witch Vomit hold absolutely nothing back, going full-throttle almost the entire length of the album, barraging the listener with vicious black-infected death metal that leans on nasty tremolo riffing, whammy bar antics, and furious drum work.  Buried Deep capitalizes on the promise of the band’s 20 Buck Spin debut and delivers something even more horrifying and satisfying for fans of death metal than even I expected.  And I expected a lot.  This is an album that sinks its claws into you and won’t let go.

Today I’m bringing you something new from an old favorite of mine.  Modern Times is certainly one of, if not my actual favorite brewery.  I’ve never had a bad beer from them, in any style they do, from stout to pilsner to IPA.  Critical Band is one of two hazy IPA’s Modern Times offers now, and is unexpectedly like drinking sunshine in a glass.  While the majority of the drink leans on tropical fruit notes, not generally my cup of tea, the subtle bitter citrus on the finish balances out the sweeter notes and transforms the beer into something that both looks and tastes a little like Sunny D.  This is juicy and refreshing in all the right ways, and is a prime example of what makes East Coast IPA’s as desirable as they are now.

One thought on “Receiving the Evcharist: Witch Vomit and Critical Band”