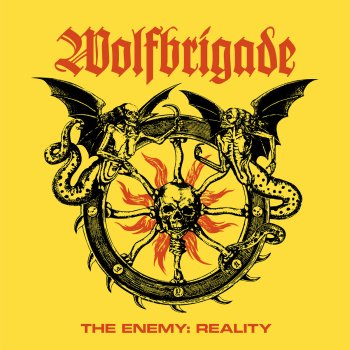 Anger.  Righteous indignation.  These are the stakes that tether and ground rock and roll to the Earth, roll it in the dirt and filth and muck.  If it can rise from that soup, caked and muddied from battle we call it crust punk.  I’m on pain meds so I have no idea if that metaphor makes any sense but it’s what I think of when I hear Wolfbrigade.  There’s little in the way of pretense or artifice on new album The Enemy: Reality.  Just an unrelenting pursuit of speed and aggression, a hardcore chase of the elusive Kilmister meat and potato savagery.

The Swedish hardcore outfit first came to my attention back in 2017 with their excellent LP Run With the Hunted, which I mentioned in our 2017 Q2 album roundup, but the fact is the band has been charging forward with their throttling engine since the mid 90s when they were known as Wolfpack.  I never heard any of that, but since their tenure on Southern Lord starting with 2012’s Damned it’s been a roiling dose of hardcore and punk, plenty of speed and rock swagger melody bringing bites to songs like “Road to Dreams” and “Nomad Pack” off of Run With the Hunted.  The small but noticeable doses of melodic death metal never overwhelm the fundamental punk rage, and that foundation is only solidified on The Enemy: Reality.

Opening track “Sum of All Vices” leans heavy into the punk influence, pick slides and d-beat thrust at the fore.  The trick is that while Woflbrigade makes it all seem so effortless, it’s a mistake to think the music is simplistic.  Anyone can rattle off a four power chord progression and rant at generalities, but Wolfbrigade have never been about emulating a style.  There’s a fervent dedication and urgency in the way the opening riff of “Fire Untamed” bursts into the more open and 80s metal swagger of the chorus.  Single “The Wolfman” gives the spotlight not only to the buzzing unique Swedish signature guitar tone, but to the potent vocal blast of singer Mikael Dahl, who brings a raspy fire that recalls some of the best, including the aforementioned Lemmy.

Clocking in at just under 30 minutes, The Enemy: Reality is that perfect injection of crusty riot you want when you need to throw your hands up and give a massive finger to the world.  The fact that it’s also catchy as hell is even better.  You know what you’re getting by the first 10 seconds of the first song, but when it’s as hot as what Wolfbrigade is bringing, I’m there for it.

The Enemy: Reality is available November 8 on Southern Lord.  For more information on Wolfbrigade, check out their Facebook page.