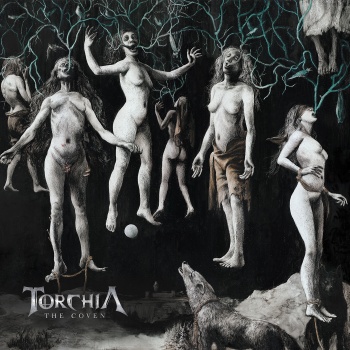 Bands don’t have to reinvent the wheel to be good at their craft. Or, at least, that’s what I tell myself when I listen to a new album and am oddly disappointed when it fails to capture my attention. While disappointment tends to be the feeling du jour when it comes to certain genres, there are still nuggets of music here and there that bring joy because some aspects of a particular genre are still thriving. This is the case with Torchia, whose newest release, The Coven, seems to stick with the powerful riffing we see in a lot of early melodeath, but they also add a little groove to their sound.

For an album that seems to be placed firmly within the melodeath sound that was popular about a decade ago, The Coven doesn’t just sit within the tried-and-true myriad of melodeath that is now an endangered species. Instead, it utilizes groove and an amalgamation of influences to keep its sound fresh and fun. It’s incredible that these guys can write a good riff, evidenced by the backing guitar on “Memoirs” and on the beginning of “Gallows.” Their instrumentality is also superb; there is never a dull moment here, as each melodic riff is counter-balanced by precise drumming and clean rhythm sections. The vocals are no slouch either; while chaotic and primal in their sound, they seem to emphasize just how good the instrumentation is. They also add a layer of grime to the music, reminding me of Kalmah; however, instead of their swamp-like nature being evident in the production, Torchia employs elements of black, death, and thrash into their music, making it sound like they’ve just dipped themselves into mud. It’s a welcoming sound, and it ties into the aesthetic that they have going on, especially with that album cover.

Personally, I enjoyed this aspect to their sound; it gave them this interesting, moving tonality that made me grin like a madwoman who found something shiny among the layers of mud and grime that one has to look through from time to time.

However, despite this, the album is not doing anything new to, or for, the genre. If you were looking for something new and different in melodeath, you might have a better chance listening to a band like Blood Stain Child than this album. However, this is still a fun listen; these guys know they are not reinventing the genre, so they allow themselves to be as creative as they can within the confines of the genre. While their intention may not be to go in a different direction, I can’t help but think The Coven is the foundation to something new. This is the second album, after all. There’s the potential of leaning into a new direction that could make this band stand out.

All in all, The Coven is a fun album filled with melodic passages, chugging guitars, and chaotic vocals that makes the music oddly comforting. Considering we are under quarantine, I need music that is highly enjoyable, and this album really scratches that itch. Go give it a listen; you might surprise yourself.

The Coven is available now on Rockshots Records. For more information on Torchia, visit their official website and Facebook page.