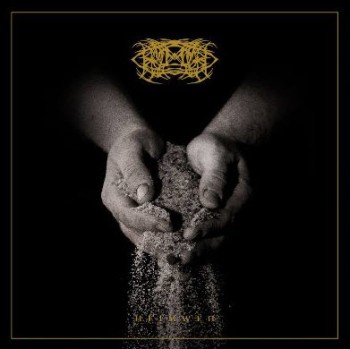 The black metal scene in the United Kingdom has been bursting with winners lately, with bands like Winterfylleth, Saor and Fen all putting out exceptionally melodic, dark albums over the past twelve months. Those bands and other UK brethren absolutely know how to use melody to brighten up their work without destroying its dark undercurrent. They don’t sit back and play the classic black metal of Scandinavia or Eastern Europe. Instead, the UK scene has taken black metal, specifically pagan black metal, to their firmly-held throne room of melody. And on their debut LP, Heimweh, London quartet Crom Dubh certainly don’t let their genre-mates, countrymen, or listeners down on this front.

Thematically, Crom Dubh stays strong with the Norse and Celtic mythology, giving their black metal a genuinely pagan feel to it. There is a bold, earthen feel with which these songs are written—as you might have surmised from the soil pouring through hardened hands in the cover art. Crom Dubh is also very adept at using their instruments to call to the listener’s mind an ancient time of battle and cold, atmospheric darkness. (It wouldn’t be the UK without grey skies and rain, after all.) Yet they do so without creating chaos and without over saturating the mix with gimmicks and effects. They create this atmosphere through careful songwriting, selfless editing and the ability to play as a band rather than a collection of people.

Twice on the album there are sets of songs that are inextricably entangled by title: “Cutting Teeth” I & II, and then the mournfully beautiful “Kings” I & II. The latter duo, possibly my favorite set of tracks on the album,reveals so much of what makes Crom Dubh successful. “Kings I” is an ambient track featuring minimal instrumentation, atmospheric screeching and recordings of natural sounds (e.g. water babbling). “Kings II” awakens the slumber and slews forth with a battle-like rhythm that gradually increases in intensity throughout the track. The guitars criss-cross melodically as the drums bombard the Earth like horse hooves. As the track builds to its climax and outro the guitars take on a whiny, piercing melodic wail as the double bass begins and the vocals peak. With Britain littered with so many ancient castles, it’s easy to see and hear the backdrop of inspiration for Crom Dubh’s music.

Much like Winterfylleth, Crom Dubh have a sound that is absolutely identifiable after hearing only a few notes. The title track is a great example of how Crom Dubh carves out a space for themselves in a scene already rich with standout black metal acts. Their guitar sounds are excessively fuzzy and layered; their drums punchy and organic sounding. The only aspect of the band that isn’t altogether unique is the vocals, shared by Simon O’Fairdehaigh and Mike Beonetleah. Even with one focusing on the lower register and the other on higher-pitched fare, the vocalists follow a similar pattern to all UK black metal acts—tortured screams in the low tenor range. Aside from a brief moment on closer “Sailing to Byzantium,” where the vocals turn into a barking, seafaring attack, the end vocal sound is a rather typical pagan black metal approach of wind-like vocals resting somewhat under the instrumentation in the mix.

In the end, Heimweh is a shiny, put-together work full of rolling hills and grassy meadows. It should appeal not only to fans of black metal but fans of melodic metal, shoegaze, atmospheric and ambient black metal and other, similar genres. Crom Dubh doesn’t have to be appreciated on horseback or in the ancient root cellar of your plebeian abode; the album has characteristics of a timeless work that you should let wash over you like the slow dawns and changing tides of time.