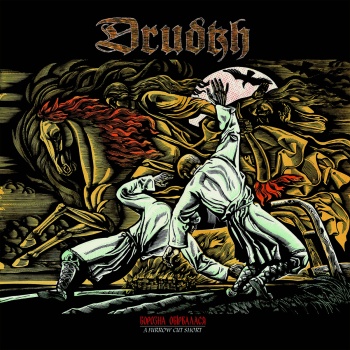 In the 13 years since their founding, Drudkh have steadily risen to the top of the black metal pecking order, becoming the most famous Ukrainian export within said category. However, several experiments and stylistic changes over the years have raised concerns that perhaps the band was starting to lose that magical touch that had transformed records such as Forgotten Legends and Blood in Our Wells into classics of the genre. With their new album, A Furrow Cut Short, Drudkh aim to silence their critics with the only language they’ve ever spoken: music.

One aspect of A Furrow Cut Short that will immediately grab your attention is its sense of urgency in comparison to the band’s other output over the past five years. Normally, such observations are a tad dangerous, as creating an album is a complex process that depends on hundreds of factors. As a result, a record that you pour your heart and soul into may still end up sounding lazy due to reasons beyond your control. But behold the dark, unusually aggressive sound of this new album, in combination with its hour-long run time (a personal record for the band), and you cannot help but sense that, amidst the turmoil in the band’s home country, Drudkh wanted to get this album out there no matter what.

Where the album’s predecessor, 2012’s Eternal Turn of the Wheel, offered meandering, almost tranquil odes to nature, A Furrow Cut Short summons blast beats and ominous tremolo-picked riffs with newfound dedication to a more traditional black metal sound. The compositions themselves contain considerably more variation than the majority of Drudkh’s past work. Instead of trying to entrance the listener through the repetition of minimalistic melodies, A Furrow Cut Short sees the band launch a frontal assault of riff-oriented black metal inspired by the Norse masters of old. A band shrouded in secrecy, this might be Drudkh’s way of confronting us with the immediacy of the terror that has struck their homeland. Songs such as “To the Epoch of Unbowed Poets” still feature the tragic, contemplative instrumental sections that made Blood in Our Wells such a compelling record, but on their new album, the sense of danger that emerges from the music feels much more tangible and imminent.

On their latest album, Drudkh sounds more eager to deliver a message than on anything they have released since Blood in Our Wells. A Furrow Cut Short is a gritty tribute to a homeland that may soon not even be theirs anymore, a fate foretold by the grim title of the closing song, “Till Foreign Ground Shall Cover our Eyes”. This record offers an enticing mix of anger and desperation, a quality which makes it the most comparable with 2005’s The Swan Road. They say that suffering is what gives birth to great art, and while this claim reeks of romantic idealization, in the case of Drudkh it is certainly true.

A Furrow Cut Short will be available May 19 on Season of Mist. For more information on Drudkh, visit the band’s Facebook page.

One thought on “Album Review: Drudkh – “A Furrow Cut Short””