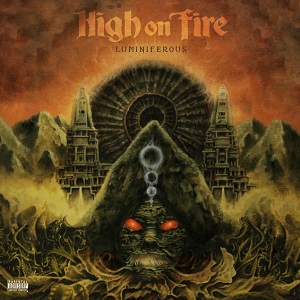 Up to this point, High on Fire have been surrounded by thieves, flown to hell and back on blessed black wings and everything in between. Now with their seventh full length Luminiferous they’re well past the point of needing to prove their heaviness, and instead showcase the full breadth of their abilities across the nine tracks found within. Of course a number of elements from the past make themselves felt, but there are also many surprises in store for those excited by just the mention of a new release. (Like me.) This album has been among my most anticipated of the year, and it does not disappoint.

“The Black Plot” wastes no time, planting a sasquatch size lead foot on the accelerator with the monstrous High on Fire gallop. The riffs are monstrous and Jeff Matz’s bass lines seem more thunderous here than ever before. It’s window-shattering stuff. Speed is the name of the game throughout and a wailing, high-pitched solo closes things out. “Carcosa” slows things down a bit and drops the tuning down into the darkness. By the end of the track, you start to wonder whether Matt Pike’s ever sounded better vocally. Sobriety’s clearly done him well, and he’s at his deadliest and most focused here.

Speaking of deadly, “Slave the Hive” and the title track are two of the band’s most vicious and razor sharp tracks in recent memory, ripping out all the stops and turning the throttle up to maximum speed. Pike stays on point with his vocals, and Des Kensel gets extra kudos for not physically breaking his drum set with the beating he puts on it. I couldn’t help but want to run around beating my chest and screaming the lyrics like a barbarian. (And I almost got to that point, but since I can’t really have the neighbors knowing I’m crazy, I just did it in my head.) The array of styles on display throughout is mind-boggling and the band completely owns each and every one of them.

Which brings us to “The Cave”—a different beast altogether. The song opens cleanly, with a trippy, sung-rather-than-growled vocal part that lingers in places through the track. It’s a slow-paced song with triumphant, huge-sounding riffs and a powerhouse performance from Pike that hearkens back to some of the best heavy classic rock. It’s the song High on Fire fans never knew they wanted, and one of the biggest standouts on an album full of them.

High on Fire continue to be one of the most consistent bands on the scene today, and with Luminiferous, the proof in the proverbial pudding. It’s heavy as hell and louder than a jet engine in your eardrum. I might just need to go back and revise my old Top 10 list after this one.

Luminiferous is available now on eOne Music. For more information on High on Fire visit the band’s official website.