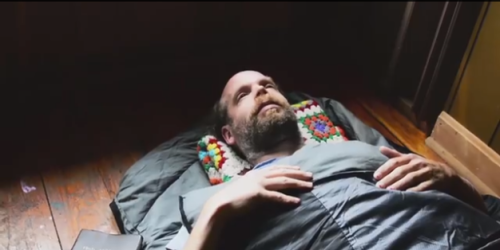 Happy Monday! And welcome to another edition of Visions ov Hell. Going forward, this is how we’ll be kicking off the week here on the blog. Why? Well…that’ll become clear later on in the week. For now, we’ve got an awesome video from genre-defying Louisville trio Coliseum to dig into, so let’s take a look.

“Sharp Fangs, Pale Flesh” is the third single off the band’s latest album, Anxiety’s Kiss, released back in May on Deathwish. The video premiered last week, and as was the case with one of its predecessors, “Sunlight in a Snowstorm,” the band’s kept things unconventional with their visual representation. There’s nothing of the band to be seen here, whatsoever. Instead, we get an eerie, low-budget-style clip that *gasp* actually mirrors the story of the song!

And what do you know? It ends up being quite captivating. The clip, directed by Coliseum frontman Ryan Patterson, stars Will Oldham (non-metal folks might know him as his stage name, Bonnie ‘Prince’ Billy) as a religious loner who finds himself tempted by some kind of unspoken evil. (“The goddess in the black dress,” as the song describes the character, played here by Katie Peabody.) As the video unfolds, she develops from an occasional flash of darkness into a real, flesh-and-blood temptation for the man—taking him hostage, dancing with him in darkness, and…