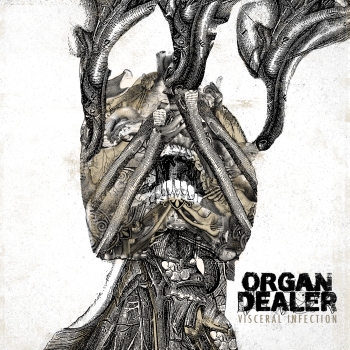 You know the feeling you get when you first hear Repulsion? Or Pig Destroyer? That kind of needle-to-the-ear drums shock that hits you as you’re listening? Well, Organ Dealer channels it perfectly on their full length debut, Visceral Infection. The New Jersey five-piece keeps things turned up to 11, and injects just enough of a death metal sensibility to clearly articulate their thick and dirty sound.

The band’s “Intro” is just about the only slower-tempo romp on the whole album, and with a short run-time and just a pinch of hardcore attitude,. it avoids overstaying its welcome. But the beatings begin with “KPC–Oxa48” and, for all intents and purposes, don’t let up until the end. The pacing is fast and frenetic and the lyrics are mostly roared, in a manner that makes you wonder just how vocalist Scott Moriarty manages to do his thing without needing vocal chord surgery.

Songs like “The Pear of Anguish” and “Festering Maze” serve up short burst after short burst of vitriol, coming at you with the speed of light.  The highlight, though, is a three-track sequence near the end of the album—just over five minutes worth of music, bear in mind—that I’ve dubbed the Trilogy of Terror: “Consumed,” “Black Dolphin” and “The Creeper.” These three come across with a powerviolence intensity and are as close as a young band can get to upper echelon grindcore. The psychotic guitars, angular drumming and vicious vocals combine to achieve the classic grind progression: Get in. Slay. Get out.

All told, Visceral Infection is a shade over 20 minutes long and will kick your ass from start to finish. It’s a great companion for the days when you just feel like nailing someone’s face to a board for doing or saying something stupid. (And let’s face it: we’ve all been there…right?) Either way, an impressive debut from Organ Dealer here.