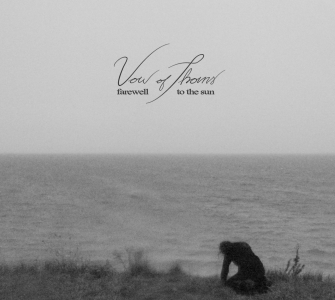 The debut LP from Vow of Thorns, titled Farewell To The Sun, was one I initially opted to bypass. Yet, despite the recent inundation of atmospheric black and doom metal in my listening periphery, curiosity still pulled me into this record. Turns out that was a good thing. Within the expansive tracks of this album, the Ontario-based group define a certain unique personality to their music that calls upon a number of influences. With this debut, it all comes together to create a sound as progressive as it is emotional.

At the outset of “Meeting on the Astral Plane”, we are enticed by thrashy, classic heavy metal leads. While glimmers of these influences resurface later in the album, this bluntness is not matched again. But here, it’s something that catches our attention as it fluctuates from these passages to the more familiar tremolo picking of the verses. So it serves its purpose of grabbing our attention, and giving the daunting song lengths of this record, it was a necessary way to open the album. In fact, this is a highlight track in the sense that it showcases much of what Vow of Thorns is capable of from a song-writing standpoint. But as we progress onward, the album settles more consistently into a despair-driven blackened doom onslaught.

While similarly categorized albums can offer a sufficient dose of inspiration through their expansiveness — and subsequent progressiveness — the intention here is darker. This may seem to be a curious claim when you work through the latter stages of the opener and the instrumental “Farewell To The Sun Part I”, which are undoubtedly uplifting. The stunningly beautiful leads intricately wander through a wide array of melodies, so it is easy to focus on the glimmers of light contained within these tracks. Not to mention the upbeat, thrashy opening moments we just made reference to. So really, what drives the emotion behind the music is the vocals, at least early on. The dark, whispered cries are not unlike those of John Haughm, but they are delivered with more grit and pain. It’s an interesting juxtaposition. The instrumental and vocal elements don’t align on the surface, but when listened through, it’s impressive how well it all works together.

I mentioned the beauty that some of the passages contain here, but there is no questioning the depression in the introspective nature of this album. Rather than focus on the suffering caused by external forces as some records may (while finding peace in nature, for example), Farewell looks further inward. The harsh leads and bipolar rhythms of “Great Abomination” emphasize a sense of self-loathing projected through the lyrics. Couple that with the eruption of aggression as we moved from the first to the second part of the title-track (which marks the beginning of the second half of the album), and Vow of Thorns really start to drive their energy home. The despair in the vocals and instrumentals, despite the quicker pace, become overwhelming apparent. It becomes impossible to not feel every ounce of agony expressed in each note and word. In fact, the beginning of the middle third of this track strikes us similarly to Agalloch’s “Our Fortress Is Burning… II – Bloodbirds” — filled with pain and frustration made captivating by the vocal and lead presentations.

From there, the album comes full circle with the third part of the title track and the closing “Doomed Woods.” The dense, brooding doom elements finally fully surface. The pace has slowed, the riffs are deliberate, and the rhythms pounding. Anger, as it were, has given way to sorrow. It is here that the album seeks — and inspires — isolation. While it may drag out (my only real knock on this album), the impact of the music remains fully intact. These songs are expansive. They are encompassing. They wander in a number of directions. This is a six-track, 52 minute album. The first four tracks vary enough to keep us interested naturally (for better or worse from an emotional standpoint). But the slower stretch from the final third of the title track through the first handful of minutes of the closer can take a bit of effort to remain focused. Fortunately, we close the last several minutes with much of the same exploration that made the earlier stages so intriguing, concluding things as impressively as they were introduced.

So far in 2016, we have heard our share of atmospheric black metal, or black doom (depending on how you want to categorize this), but there is plenty on Vow of Thorns’ debut that helps it stand out. From the variety of stylistic influences to the well-executed balance of aggression and sorrow, it is an exploration both musically and emotionally. Some aspects of Farewell To The Sun may ring familiar. Others are more dynamic and reach for new limits. Either way, it is all executed well, leaving us in a state of appreciated isolation. Any listener familiar with black or doom metal is sure to find enough here to keep them returning several times over.

Farewell To The Sun will be out July 15th. For more information on Vow of Thorns, visit the band’s official Facebook page.

One thought on “Album Review: Vow of Thorns – “Farewell To The Sun””