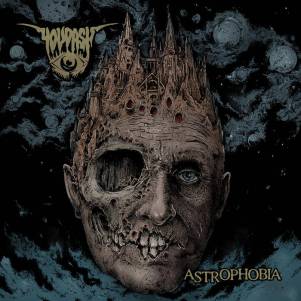 Somewhere in the multiverse there is an alternate earth where ice-cream, cotton candy and LSD are served on every meal, Lemmy lives and reigns as a benevolent god emperor, people travel by riding sentient technicolor clouds, nu metal never existed and everything is groovy and awesome. In that world, scientists and magicians joined forces to open a portal through which they sent to our dimension their best and brightest metal band on a mission to inspire awe and show us how it is done. That phantasmagorical shapeshifter is Youdash and they have unleashed their phenomenal debut Astrophobia into our unsuspecting timeline. Its impact can only be described as seismic.

Any band citing the likes of Gorguts, Car Bomb, Gojira, Meshuggah, Dillinger Escape Plan, Naked City and Mr. Bungle as its sonic relatives is destined to falter when it is time to impress with a coherent vision and execution, but Youdash sneers at the nigh-impossibility of the equation and decides to operate with the grace and elegance of an insane asylum denizen swaggering and somersaulting on a tightrope. Its eclecticism never dissolves into the self-congratulatory eccentricity that is too often the case with metal bands that have a penchant for weirdness. Most importantly, the songs remain cohesive and wildly creative, never resorting to unnecessary oddity or bland chugging. Compositions burst with imagination and hyper-kinetic aggression, and elicit a primal physical reaction. At the same time, a palpable sense of joy foreign to metal infiltrates every single note. Metal is rarely this fun and intense.

After a deceptively straightforward intro, Youdash brings out the confetti cannon and provides a dropkick to the solar plexus with “Celestial Phenomena.” Like a ball of lightning trapped inside a pinball machine, it is a dizzying tour de force of zig-zagging riffs, oscillating bass lines and multi-tentacle drumming, peppered with cowbells, ratchets and whistles. An unexpected transition to infectiously groovy funk paves the way for a thrilling charge and final breakdown before the band delivers another piledriver with “Hunting among the Stars”. Bizarre electronics appear out of a haze of nitrous oxide to set the stage for slam-dancing dervishes. Rumbling bass lines and a volley of kick drums provide a foundation for a ripping lead progression which serves as a prelude for a spectacularly thrashing meltdown replete with gang vocals and frenzied fretboard wizardry.

Whenever you think you are close to unraveling the enigma of its compositions, Youdash pulls the rug with disorienting about-face turns that accelerate with enough g-force to make a mammoth lose consciousness. Besides sudden tempo changes, Youdash impresses with abrupt yet perfectly fitting and giddying stylistic shifts, such as the preposterously assertive sashaying in “Deathstar,” followed by a lumbering section bringing to mind a booze-soaked cover version of Morbid Angel’s “Where the Slime Live.” The joyful dash in “Devouring Cell” erupts with metal heroics, before ending with despondent bass chords and deep bass drops. Soon after, ratchets re-appear to complement the acidy electronics of “Astral Anxiety.” Truly bonkers, and it all works beautifully.

These demented dimensionauts gallivant with absolute confidence and slay with the force of a hurricane of meat cleavers. Youdash glides with the elegance of a ballet dancer and hits like a battering ram, crushing bones and scrambling brains in its wake. Astrophobia is a stunning game-changer in an era chock-full of creative and inventive metal. One can only imagine what kind of mesmerizing metal mischief these mind-bending tricksters come up with in the future.

Astrophobia is available now on Deformeathing Production. For more information on Youdash visit their Facebook page.