One of the most common sentiments I heard in the metal circles I run in, and one that I personally echoed in some of my own writing, was that 2016 was the year of death metal. From the old-school pummel of Blood Incantation, to the technical whirlwind of Ulcerate, to the blackened chaos of Altarage, there is no question that last year produced a flood of truly spectacular death metal from all across the spectrum. The question of the hour: was this just good timing, or is there a continuing upward trend in the quality of death metal? If The Ominous Circle‘s debut offering of haunting death worship on Appalling Ascension is any indicator, we have only seen the tip of the iceberg in terms of what death metal holds in store for us.

Hailing from Porto, Portugal, The Ominous Circle are a new face in the extreme metal world. The band came into existence in 2014, yet took several years to meticulously craft their debut album, Appalling Ascension. The time and care spent on this release is evident; the sound achieved on this debut would make one think this is a band with serious tenure. Perhaps these anonymous musicians are seasoned vets after all. Either way, the fact of the matter is that Appalling Ascension is a triumphant opening statement. The album plays like a love letter to everything that is good about death metal. While much of the music is rooted in the new school of so-called “cavernous” blackened death metal, elements of slithering death/doom, coupled with airy and eerie melodies keeps the album varied enough to retain the listener’s interest over its near hour run time. Appalling Ascension never succumbs to relying solely on atmosphere and production to get its point across; the instrumentation is clear and articulate, and while there is a decidedly dark feel about the album, nothing ever descends into that “murky for murky’s sake” level of overcompensation.

What cements Appalling Ascension together is the ecstatic fervor that permeates the whole listening experience. From the opening call-to-worship of “Heart Girt With a Serpent”, the tone of the album is one of religious zeal. Many bands refer to their songs as “hymns” but The Ominous Circle are one of the few bands that feel worthy of such terms. The lyrical content on Appalling Ascension deals with the worship of death; rather than death being something fearful, The Ominous Circle encourage listeners to consider death from a spiritual point of view, to see death as a force of transformation and a road to new dimensions beyond the mortal life we experience. This overarching ideological theme is the glue that holds all the elements of The Ominous Circle’s music together, and gives the added weight to the songwriting that takes this album from good to great. 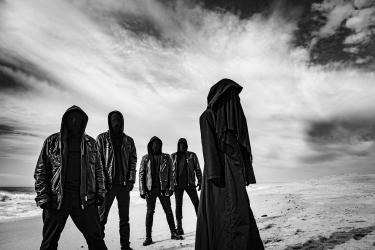 Appalling Ascension is an album that truly gives credence to the “ominous” part of the band’s name. Combining the best of both old and new schools of thought into an absolutely monstrous sound, The Ominous Circle are here to silence anyone who thought death metal couldn’t get any better. With regard to both this band and the scene as a whole, the best is truly yet to come.

Appalling Ascension is available January 27 on 20 Buck Spin in North America and Osmose Productions in Europe and the rest of the world. For more information on The Ominous Circle visit their Facebook page.