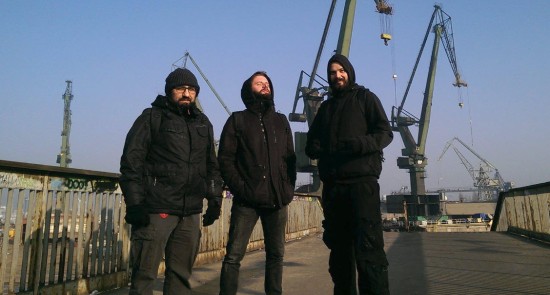 Hail Death was a late 2016 punch to the face courtesy of Polish metal warriors UR. Building on a solid modern black metal foundation, the trio moves through death metal, thrash and even some elements of punk and goth to deliver a sharp, concise record that stood out as a great debut in a year chock full of amazing releases. Guitarist/vocalist/mainman Gregor took some time to talk with Nine Circles about the history of the band, working in a trio format, and how the Polish metal scene has grown into the powerhouse it is today. Check it out after the jump. 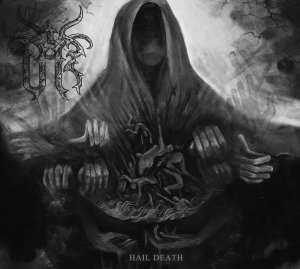 When and how did the idea for UR come about? Was there something the other projects you’re involved in couldn’t do that prompted the new band?

The idea of UR was born in December 2015 after the collapse of the band named Recall (I was only a vocalist there), which we created with another guitarist, Piotrek. After his departure we were faced with the dilemma of whether to continue playing or terminate the band. We decided to continue but it turned out that after my transition to a guitarist, something totally different was born. I had a lot of interesting and fresh ideas, which in my opinion were very different from what we did before. So we changed the name and began a completely new story in our musical life. Importantly UR is not a side project of musicians from Bloodstained or Bloodthirst but a full-fledged band, which was the result of a successful experiment!

One of the things I love about the EP is the sound you’re able to get as a trio: it sounds massive without sacrificing clarity — you can clearly hear each member working off one another. Was there something about working in a smaller unit that appealed to you?

I am happy to! This, that we are a trio is very important to me. It is an excellent, traditional formula, which has always worked great in hard rock music. Without a doubt, you need to look at the roots of UR right there! We are a team that uses the old guitars with retro pickups and the natural sound of the drums, which is doing something completely different than most of the current metal players, who’s guitars are packed with electronics and who’s drums pump with triggers. For me, this kind of sound is unbearable! The three of us work very well, I like this specific chemistry at rehearsals and on stage. Less combining, more playing!

To my ears it’s apparent black metal is the foundation for the songs, but it’s almost a launching point to go anywhere: you can hear a doom influence in “A Dying Star” and “A Tongue of Fire” almost immediately jumps into a stomp that’s one of my favorite moments on the album. How important is genre to you, and do you feel any limitations as to where the music can go?

In general, we do not think about what we play and that sometimes we do not cross the boundaries of style. We get carried away and let the music flow. Each of us has a different taste in music so this contrast for us is something completely normal. Bony (bass player) listens, for example, to a lot of punk music, which unfortunately sometimes you can hear in his careless game (hehe), Kroll (drummer) likes bands like My Dying Bride and Paradise Lost although he is not a sad dreamer and drums very strongly, firmly and loudly! For me, I like to open a beer at the concert of Buddy Guy and we all love Anaal Nathrakh (hehe)! You should admit that we are rather open minded?

What about influences? You can ask a dozen people what they hear in a song and chances are you’ll get a dozen different answers. While I can definitely hear a lot of exploration of genres in the tunes — everything from death to hardcore to thrash to doom — I’m interested in what bands or albums were touchstones for you in terms of the style you wanted to pursue with UR. How much did the music you were listening to or loved impact the overall album?

Actually, I’ve partly answered you on this in the previous question. The list of inspiration is long and very diverse, and that’s what makes this material so varied. I do not know what to say, it is very difficult for me to determine how much of what I hear from other bands, has the power to break into my own musical space and what are these elements. It probably happens outside my will. Certainly I’m not trying to copy anyone to achieve satisfactory results and I think it works quite the opposite.

Plagiarism is an artistic suicide!

I’ve read elsewhere that you build out the framework and bring it in to the other members for their input. What are some of the things Bony (bass) and Kroll (drums) bring to what you’ve prepared?

I let the rhythm section be a lot of what I often regret (hehe). It’s a fact that I bring ready frames to the rehearsals but Kroll and Bony give the songs dynamics and feeling. A good riff doesn’t make a piece without a motor of good rhythm. I am aware of that and because of that I respect the work of my colleagues, and never impose certain divisions of percussion, this is the work of Kroll, who knows it and will do it better, sometimes will do it in an unconventional way and then it gets really interesting. Often very reliably we work on accents and finishes, there seem to be only small parts but these are the things that add to music a taste!

Each song is a punch to the face: “Only Bones Stay Here” is just a little over two minutes, and feels like it gets its message across perfectly in the time it has. There’s a tendency for songs to go on and on, and yet on Hail Death there’s a great economy to each song, doing exactly what they need to do and then getting out. Was this intentional? Are we ever going to get the 20 minute UR opus?

I like that you call our songs economical! Intuition made these pieces what they are. We never count the time before the end of the song, just play as we like and how we would like to hear it. That’s how it is, that in the initial stage you have to be your own audience and if you are critical to yourself it should all go well … The longplay over which we work will be much longer and the songs a little more complex but I assure you that boredom is the last thing you’ll experience while listening to it!

It seems like — especially in the last few years — the Polish metal scene is really bringing some great music to the world – the days of folks just knowing Vader and Behemoth are long gone. How is the scene from your perspective, and how has being a part of that community affected UR?

I am very happy the more that bands from the underground are playing at the moment a lot more interesting than the big stars, and this applies not only to Poland. There are a few bands that came out of the shadows and are doing very well as Mgła or Furia, who play ambitious and uncompromising, but last year some albums of old-timers came out such as Arkona, Warfist or Stillborn and let’s face it, these albums kill! Superb is also the latest album of Christ Agony “Legacy”, number one for me! At the moment still I do not feel that UR is part of the scene as long as we stay aside from the mainstream and who knows, maybe longer remain so?

How are the tunes coming across live? Have you had to make any adjustments to the songs?  What’s the plan to bring this music to a crowd of head-thrashing fans?

We simply go out on stage and do our work. We do not modify our pieces, we bet on sincerity and so far it works perfectly. I really like minimalism and playing on emotions, I think that UR’s music is perfect to do this!

Did Hail Death accomplish what you wanted? What does the next chapter of UR look like?

Definitely! Hail Death was received very well and is a great introduction to the full album which will be released later this year! It is currently the number one topic on which we focus all our attention!

Thanks for the interview! Let The Darkness Come!

Many thanks to Gregor for his time!

Hail Death is available now on Arachnophobia Records. For more information on UR visit their Facebook page.

One thought on “Interview: Gregor of UR on “Hail Death”, Ignoring Genre, and Song Economy”