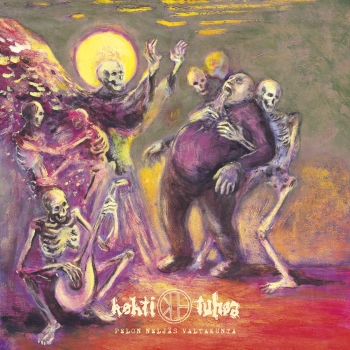 Happy Thanksgiving.  It’s pretty hard to find things to be thankful for, as I watch the headlines pop up on my phone, my television, even (with diminishing frequency) my newspaper.  It’s a weird solace to take, but what seems to be happening in America right now isn’t exactly unique – Finland’s political climate appears to slowly coming into alignment with the U.S., and like us bands are echoing the anger and frustration in their songs, perhaps none more so than the punk/hardcore outfit Kohti Tuhoa, whose second album Pelon Neljäs Valtakunta is a blistering attack not just on the antics of the right wing establishment, but on the state of metal.

The line between punk and hardcore is often blurred, but throw a heaping dose of near-grind into the mix and it get even harder.  Kohti Tuhoa’s self titled 2014 EP does just that, but rather than try to map out the demarcations it’s best to just sit back, Whistler’s Mother style and let the chaos of tracks like “Ohjelmoitu Voittaja” and “Koe Tusska” wash over you.  By the time of last year’s full length Rutiinin Orja things were definitely skewed toward an old school, 80s hardcore vein.  Although the production gets right in with the classics from that era, the musicianship is hella (is that still in use?) tight, the lock between drummer Markus, bassist Aleski, and guitarist Ville perfectly synchronized for maximum face-ripping.  If you’re at all familiar with Finnish hardcore punk acts like Terveet Kädet, Varaus, or Riistetyt you’re in the ballpark, though in vocalist Helena Kohti Tuhoa bring an additional level of insanity and passion to the songs. Her voice pierces above the buzz of of the guitars that’s at once unique and perfect for the vibe the band is going for.

And on Pelon Neljäs Valtakunta that vibe takes another turn, moving forward and emphasizing a vibrant speed metal/punk hybrid that first brought to my mind the wonder of Melt Banana in their best work.  Part of that can be attributed to Helena’s vocals, which in affectation have a close match, but it’s also in the way the songs swerve in and out of direction, often taking jarring leaps that never lose sight of the overall punk esthetic.   The minute that encompasses opening track “Hajota ja hallitse” seems to be 80% pick slides, and it’s glorious.  Every track rushes by at about the same pace: somewhere in the vicinity of “frantic” and “hanging on for dear life” that makes for a breathless and infinitely repeatable listening experience.

Lyrically everything’s in Finnish so who knows what’s being said, but the beauty is it doesn’t matter if you don’t know – Helena’s vocal acrobatics are as vital an instrument as anything else, and listening to her wails, screams, and yelps get across the sense of righteous rage that is echoed in the others.  And speaking of the others, I mentioned before how tight the sound is – with an amped up production bringing everything out more I’m close to calling Ville’s guitar tone my favorite musical thing of  2017.  The entire band is on fire, allowing for an atom of more space in the songs to let them inhale as well as exhale over you in a violent spew.

Having an album this good come so late in the year feels like a shame.  In a perfect world everyone would have time to listen to Pelon Neljäs Valtakunta and revel in the intensity Kohti Tuhoa is bringing to the world.  But then again, in a perfect world there might never have been a need for this kind of music, so if I’m thankful for something in this crazy world this Thanksgiving, it’s having the opportunity to put this album in my ears.

You’d be crazy not to do the same.

Pelon Neljäs Valtakunta is available November 24 on Southern Lord.  For more information on Kohti Tohua, check out their Facebook page.