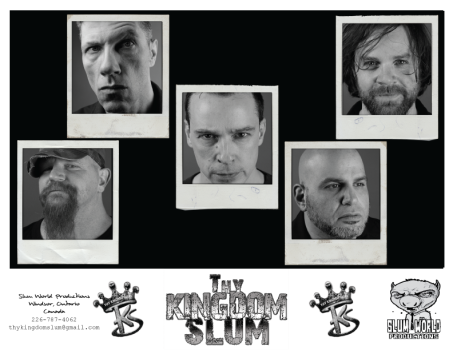 With an interesting promo sheet and heavy Clutch / Down influences, Canada’s Thy Kingdom Slum will be releasing their debut album, A History of Dissent, this week on Slum World Productions. The previously mentioned promo sheet reads like a dossier from a group of mercenaries bent on, in their own words, “reweaponizing musical frequencies to awaken the complacent and inactive dissenters.” The band’s muscular rock swagger throughout will not only appeal to a wide audience but is also more than enough to keep listeners entertained and maybe even jump start this reweaponization. Just ahead of the album’s release we spoke with mastermind Trevor De Block so head inside to see what he had to say.
— 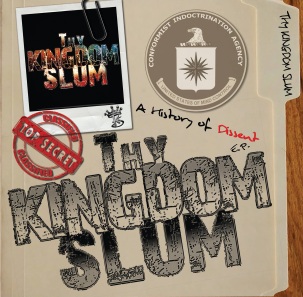 Music has always been a driving force in my life in one way or another. From the days of wearing a Peter Criss iron-on t-shirt for grade 2 photos to getting my first instrument as a gift from my mother at 14. I started out playing Bass guitar, and after a few months of getting the hang of playing, started in a band. I was hooked rather quickly with the creative possibilities it offered.
Success for me is as ongoing a thing as life is. So far, the launch of TKS has set the foundation for continued effort to write music that satisfies our tastes and illicits the favour of those who enjoy our specific brand of musical madness..

When I started a band called Lodown we had a gig at a place in Port Burwell, Ontario. It was an indie festival at a campground where the only rule was “no glass.” So we got there a bit early that day, enjoyed some libations then hit the stage sometime around or before dinner. We got two songs into the set when Michael, our current front man here in TKS asked how the fuck everyone was doing.. and a few more expletives, but nothing out of the ordinary for rock n roll. We started into the next song, watching all the people from the campground making their way to the stage when all of a sudden the front show is cut, and this roided out, grey haired fella comes yelling at us that we are done, and proceeded to kick us out of the festival. There were some other shennanigans that followed up where he tried to assault me, etc. But we got kicked out of Country Camping.. for swearing. The place had just one rule… Or so we thought.. haha. Wish we would have had some warning that we couldn’t do that. Regardless we came back to our hometown and played an impromptu show that very night anyhow!!!

The great things happening in metal are the fans. The ones that respect the value of music and the artists. They are the lifeblood that keeps the pulse alive. Metal is an infectious genre, and a disease that is usually for life in one way or another. Blessed are those that revere its greatness.
The worst things?  ALL conformity, complacency and general condemnation of things people refuse to investigate..  Lol

TKS is basically a musical reponse to the social and political climate we are facing today. The system is unfolding into some Huxleyan Nightmare at the detriment of liberty, and there is a major lack of outrage from the majority of people. The lies, and deception we accept as politics, makes it all seem like some reality show called “idiocracy” sometimes. TKS is what happens when you realize that liberty is far more important than free honey, so to speak..

I got into metal at a real early age, as I said with the Kiss t-shirt in grade 2. I started to like heavier music as I grew older, and really didn’t care what my family thought. I think I just played my music louder if they didn’t like it back in those days.

Be honest with the understanding that musical tastes are subjective. What some folk see as remarkable and outstanding, others will see as drivel. I have a respect for the tasks of critics, I’m just glad it isn’t my job.. haha

At this point the members of TKS are all doing what we have to to keep ourselves warm, housed and fed. Our goals with TKS are more in the lines of inspiring independence and sparking a revolution that begins in the mind. Awakening the spirit of listeners to seek better than the domineering system we currently are subjects to. We would rather have dangerous freedom over peaceful slavery and we are here to provide the soundtrack to that revolution.

I listen to many different genres myself, and it changes with my moods or what I am doing. It’s very difficult to single out specifics but I really dig Clutch’s Psychic Warfare, it has been in my player since I got it.

We are on the dawn of our premiere independent release. Right now our focus is to get the word out, and get to playing shows in every locale that we can, and played on every radio outlet that will play us. Wherever the road leads from here we will be sure to take it.

Summarize your band in exactly one word. (Disclosure: If you include additional words, we will select our favorite for the final publication

Many thanks to Trevor and Thy Kingdom Slum for their time!

A History of Dissent will be available February 17 on Slum World Productions. For more information on Thy Kingdom Slum visit their Facebook page.