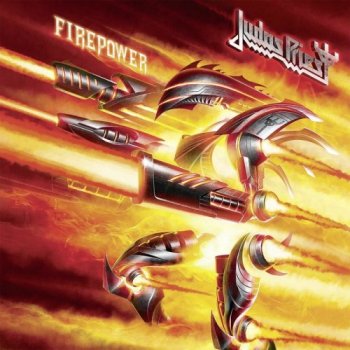 There’s a reason everyone, including the Washington Post, are getting a word in concerning Firepower, the 18th opus from Judas Priest.  Forget the fact that few bands have sustained their vitality over 40+ years with so few missteps¹: even fewer bands can boast of the visual impact they’ve had on a genre.  For so many people Judas Priest by their very presence defined metal.  Taking cues from the likes of peers Black Sabbath and Led Zeppelin and injecting a lethal dose of razor sharp riffs (not to mention that iconic scream), Priest crafted a singular sound that could encompass blues, prog, glam and straight up thrash without losing an iota of identity.  For many bands there would simply be nothing left to prove.  And yet, Firepower proves to be the best album the band have released in over 25 years, filled with everything the band have dipped their hands into since “Rocka Rolla” graced our ears back in ’74.

There’s also a difference between honoring your influences and evolution and simply mining them.  Firepower is not an effort to emulate past successes: take a track like “Evil Never Dies” which serves up a dish of everything from the brooding classic rock of Sad Wings of Destiny right up to the heavy metal assault of Painkiller with just the slightest dash of Turbo in its pre-chorus.  The food comparisons are justified: at 14 tracks and nearly an hour long this is a feast of delights.  Even more apt: you’re probably going to need to stuff those last two songs down, but in the end you know you’ve dined on something immense.

And at this point, I’ll suffer through the gluttonous nature of record.  With the news of Glenn Tipton’s battle with Parkinson’s, resulting in him being unable to tour, the future is at best uncertain if we’re going to hear anymore new music from the outfit again.  Working on that assumption, it’s easy to understand the desire to get everything they could out to the fans. Boasting a stellar production by Tom Allom and Andy Sneap the sound is modern but never stale and cold.  One of the crimes that could be leveled at 2014’s Redeemer of Souls was the drum sound; there’s no problem here as Scott Travis sounds HUGE.  Any fears of Sneap making Priest sound like every other modern metal band he’s recorded are unfounded.  This sounds and feels like the band we’ve all come to love over the years.

The guitars get a solid upgrade in the sonics department as well.  This is some of the heaviest riffage the band have ever produced, and the combination of Tipton and Richie Faulkner have come out all guns blazing (Yeah, I did that).  Every track is rife with ideas and solos, and Faulkner has settled in as a vital and fully integrated part of the team. At this point he’s seven years in as K.K Downing’s replacement, and the life he’s brought to the sound is mirrored in how amazing Rob Halford’s pipes are.  Age has certainly caught up a bit, but like a wine there’s an added depth and – dare I say – fragility to some of the quieter moments.  That’s not to say the signature high pitched scream is gone; it’s used more sparingly, making it all the more effective when it’s unleashed.

We’re 600 words in and you might have noticed we really haven’t dug into the actual songs yet.  I usually take a paragraph or two to address album highlight and lowlights, making small notes here and there, but since this is Judas Priest we’re talking about and potentially the final Judas Priest album, I’m going to take the rare instance of calling out each song and give them a small moment in the light:

“Firepower” – The opener hits that rapid fire (I’m going to be doing this all day, folks) blast of pummeling double kick and chugging guitars for a call to arms.  Halford digs deep for a nasty delivery and the solos run all over the place.  That breakdown prior to the final verse is massive.

“Lightning Strikes” – Even more massive, this is the head-banging surge.  The chorus hits that patented Halford high, and the dive-bombs from Faulkner and Tipton are ridiculous.  I love the epic quality of the chorus, Halford’s voice soaring over those open chords.

“Evil Never Dies” – I mentioned earlier, this song goes to so many different places.  Things slow down a bit for a more menacing vibe until that “Beware there’s voodoo in the night” which feels ripped right out of the Turbo playbook, except it’s immediately followed by a ripping chorus.  This is also the first time we get some of that deeper, richer vocal delivery.

“Never the Heroes” – Synth intro got you worried?  Then those triggered sounding toms?  Never fear, it just means Priest are tapping into that 80s vibe to brood.  When the guitars kick in they kick in loud, and the chorus hits a suitably majestic edge.  If it’s not quite up to the level of the first three tracks, it’s a nice mid-paced rocker that goes down easy.

“Necromancer” – I love this track.  Has that great opening riff against chanted vocals, then goes full throttle in that patented Priest cadence.  There’s not a moment of “Necromancer” that doesn’t feel evil and heavy.  This feels straight from Painkiller, and that couldn’t make me more happy.

“Children of the Sun” – More of the super heavy, super dark Priest that I love.  At this point we need again stress how great Scott Travis sounds on Firepower.  Folks will keep going back to Halford, Tipton and Faulkner, but without Travis keeping it locked in this album wouldn’t be working like it does.  Also, that acoustic break is straight out of Sad Wings of Destiny, and it’s brilliant.

“Guardians” – It’s the midway point interlude.  A quiet, pretty theme played on piano until the other instruments swell in, I think of it as the calm before the mighty storm that is the next track.

“Rising From Ruins” – This is the highlight of the album for me.  I remember as a kid playing “Blood Red Skies” over and over (one of the few decent tracks from Ram It Down) and although this is a vastly superior song (that chorus is KILLER) this gives me the same feeling.

“Flame Thrower” – This hits that rock and roll feel the band does so well, particularly on British Steel.  There’s a boogie feel to this rocker, and it’s a nice fun track after the anthemic “Rising From Ruins.”  Oh, and another killer solo, though that shouldn’t be shocking at this point.

“Spectre” – Is “Spectre” the Firepower analogue to “The Sentinel”?  It hits the darkness that always pervaded that track and Defenders of the Faith as a whole, which forever will reign for me as a better album than Screaming for Vengeance.

“Traitors Gate” – This is Judas Priest doing power metal, and I LOVE IT.

“No Surrender” – Throughout Firepower the songs lyrically tackle themes of war, both internal and external.  This is Judas Priest firing on all cylinders, hitting that epic sing-along chorus and matching it with a stomp heavy sound that is going to blow everyone away played live.

“Lone Wolf” – And just to prove no one is completely infallible, here is a song that probably would’ve been better as a b-side.  There’s nothing inherently wrong with “Lone Wolf” but when you’re up against the quality of the surrounding tracks this might have been better left out in the cold (oops, I did it again).

“Sea of Red” – A massive, simply epic and majestic closer.  Reaching again all the way back to the debut but injected with a passion and fury that only comes with 40 years of rocking harder and truer than almost any band in existence, this is the perfect closer to Firepower and if it’s the last new song I ever hear from Judas Priest, I’ll be okay.

Put in the simplest of terms, Judas Priest defined what heavy metal is for me.  It’s Sound + Vision, to pull a song title from another musical hero of mine, and for over 30 years I have heeded the siren call of the masters of British Steel.  If this is the sound of the last bell tolling for Judas Priest, then the ring of Firepower will reverberate long and loud and ensure their seat upon the throne of metal is secured.

Firepower is available everywhere a heart beats for metal on March 9 from Epic Records.  For more information on Judas Priest, check out their website or look to the skies, for the Metal Gods will be shining down on us all.

¹ I’ll give you Nostradamus and the Ripper era (even though Jugulator has its moments), but you’ll never take Turbo away from me – 1986 was a crazy year for a 13 year old kid, and watching the videos for “Turbo” and “Locked In” made it bearable.