I would like to start this review by talking about, as we usually do, Jeff Goldblum.  Ever eccentric, Goldblum’s career has reached a peak of absurdity as of late, allowing his je ne sais quoi to permeate internet, TV and even metal culture.  When Brooklyn’s Fliege released their debut that was entirely based on David Cronenberg’s The Fly and featuring gratuitous samples of Goldblum, it was clear that at least part of the concept was humor.  However, deep down, the songs had merit, and on Fliege’s full-length debut, The Invisible Seam, the band shows they are way more than a joke.

Taking their concepts a little more seriously this time, The Invisible Seam is based around Ingmar Bergman’s The Seventh Seal.  In keeping with the cinematic theme of their self-titled demo, The Invisible Seam features heavy sampling from the movie, and continues the band’s stylistic mashup of buzzsaw black metal, classic thrash riffs, and post-hardcore breakdowns.  New to this album is synth player Chris Palmero, who rounds the duo out to a trio and provides some much-needed depth to the overall sound of the album.  On standout tracks like “A Light in the Black Pane” and “Love Plague,” the interplay between the guitars playing melody and riffs and the synths carrying the mood help elevate these songs. Also helping to boost the songs are the clean vocals of guitarist Coleman Bently, which are much more melodic and less post-hardcore chant this time around.  Overall, the sound of this album is much more mature, which is very nice to hear. Part of the charm of Fliege’s demo was the goof factor of doing a Jeff Goldblum-inspired album, but it is refreshing that they chose to push themselves instead of doubling down and becoming an exclusively Goldblum-core band.

As much as the sound of the band has matured, there are bits of the album that still leave me wanting something more. The synths do a great job of filling out the sound, but the overall production feels like something is missing. I don’t know if there’s any bass besides the synths on because I just can’t hear any, and there is an awful lot of treble from the guitars that muddy things up in the mix.  The electronic drums don’t exactly help even out the sound, but they do lend an interesting industrial quality to the songs.  Still, the production on the album makes me wish for a little variety in the tones the band plays with. However, there are enough righteous riffs and anthemic moments to keep me listening from start to finish. Tracks like the title track and “Four Suns” bang hard, thanks to the riffage of Coleman and Peter Rittweger’s throat-searing vocals.  The Invisible Seam is chock full of moments that effectively blend moody synths and bleak black metal with anthemic choruses and classic hair metal riffing in a way that makes me excited to see them take their sound further and polish it more.  It is clear Fliege is a band with a vision and they are not putting themselves in a stylistic or artistic box when it comes to seeing it through. 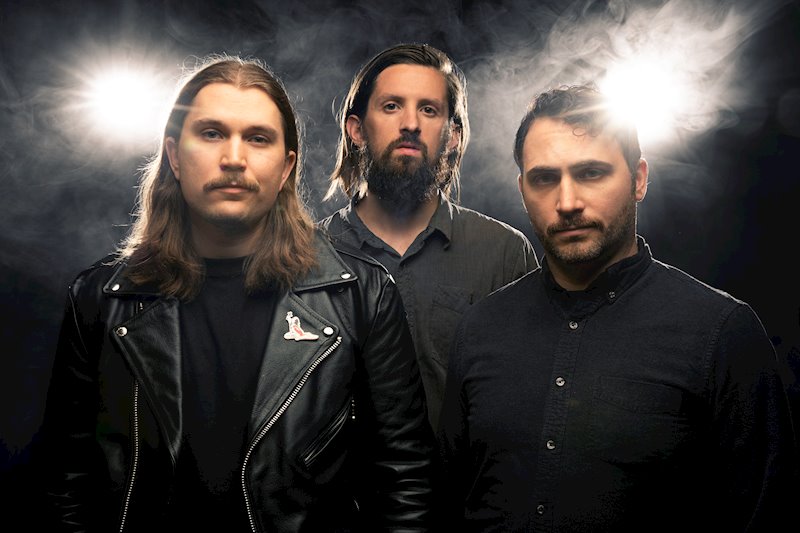 The Invisible Seam is an ambitious album, but it definitely lives up to the promise, and admittedly, it got me to watch The Seventh Seal which I’m sure is at least part of the reason behind the album. This does beg the question though of what will be the concept behind the next one?  Jurassic Park maybe?  Vertigo or The Birds?  Any one of a number of Nicholas Cage vehicles?  I think it’s safe to say that the possibilities for these good Brooklyn boys are endless.

The Invisible Seam will be available January 31on the band’s Bandcamp page. For more information on Fliege, visit their Facebook page.