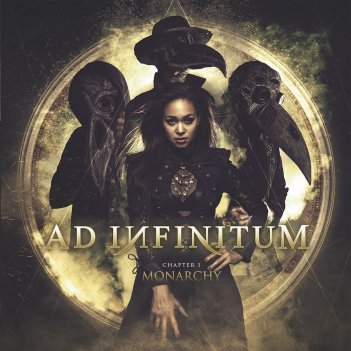 At this point, everyone knows how I feel about symphonic metal, and I have discussed at length about how the genre has been severely over-saturated over the years. However, this genre just keeps pulling me back, a siren’s call to those who hold out some hope regarding something new that is not coming from the pioneers and the well-known bands of the genre. As such, when I see a new band with the symphonic metal label, I immediately stand up and take notice of what they could potentially do. After all, finding a diamond within the grime and the white noise in a genre is the one thing that makes this old cynic want to give symphonic metal another chance. Ad Infinitum is that chance, as their debut Chapter I: Monarchy, checks all the boxes that makes good symphonic metal great.

Or, perhaps, I had incredibly high expectations.

Calling Chapter I: Monarchy a symphonic metal album is short selling its musical capacity, as there were moments where this could have been what Kamelot did on The Shadow Theory – they would have incorporated all of their musical influences into a cohesive unit that would have made sense with their new aesthetic and story direction. Ad Infinitum took everything they had – including all of the general tropes that come with symphonic metal (the female vocalist, the standard growling, the bombastic music openings, the sweeping passages of instruments) – and created something that made me want to return, to constantly take apart its musical influences and then deconstruct them further until only the marrow was left. Everything about Chapter I: Monarchy is solid: the music is well-orchestrated and well-produced; Melissa Bonny’s vocals are a joy to listen to, as she does both the clean and harsh vocals on the record; and there is a lot of emotion and drama that would make any symphonic metal fan want to invest themselves. For this 43-minute runtime, you are enjoying every single moment of the music – every sweeping orchestral passage, every key change, every instrumental solo that makes you want to shake your fist in the air. Hell, I have a feeling this band would be fantastic live, as the sheer energy that comes off this album is something to behold.

However, despite their luster and their energy, the album also feels incredibly hollow. It was a nagging feeling that constantly reared its ugly head as I kept listening. After all, why was it there? It’s a great debut and I have nothing bad to say about the music itself, but, at the same time, I can’t help but think that Chapter I: Monarchy is a one-time listening experience. The more time I spent with it, the more I kept noticing the cracks under the veneer. The music was lackluster in parts, particularly in the song “Revenge,” which felt like it was added after the fact. That was the song that I didn’t truly like, as it felt out of place on what had been a high-energy album at that point. Even the slower songs on the album, like “See You in Hell,” had a high-energy component that made them listenable and memorable. Its cohesiveness was also one of its major detriments, as the music could blur together, and I couldn’t pick out one song from another without looking at what the song name was. Perhaps that’s due to familiarity and how well you come to know an album, but I didn’t expect it to blur so quickly. The album would have benefited from different thematic and musical aspects embedded into its overtones, as it would have been clear when a song had a distinct closer and a distinct introduction.

All in all, Chapter I: Monarchy is great for a debut, but it’s not looking to reinvent the wheel. If you come in with low expectations and are wanting to have a good time, then this album will do it for you. I found myself coming back to it more and more since before its release, and I can’t help but feel that my opinion will change once I drop this for a while and then come back to it in a few months. In the meantime, Chapter I: Monarchy is a solid foundation for Ad Infinitum and I am interested in seeing where they will go for their next outing.

Chapter I: Monarchy is available now on Napalm Records. For more information on Ad Infinitum, visit their official website.