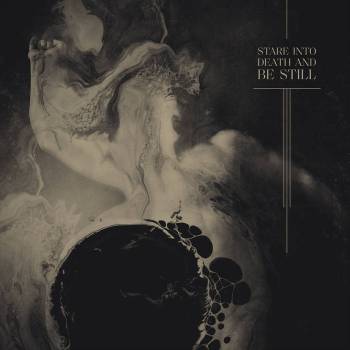 Sometimes you play an album and immediately know that this one is different. I almost didn’t write this review because I wasn’t sure I could even put words to my thoughts and feelings. Despite listening to Stare Into Death and Be Still by Ulcerate more times than I can count in the past weeks, I am left awestruck by this marvel of technical and progressive death metal. Yet even those words seem meaningless in the face of this revelation of heavy music.

Fresh on the heels of gushing uncontrollably about the new Elder album, where the words flowed fast and furious, where I had to restrain my impulses to write until I ran out of storage, comes an album where I am at a loss. It is so remarkably different, so unconventional and exceptional, that I expressed to my colleagues here at 9C that I didn’t think I’d be able to write anything about this album at all.

What follows is an adaptation of a back and forth that Vince and I had about the album, where he also professed an inability to do the album justice with words. I’ve modified it to add clarification where I felt it was worthwhile.

Charles: I can’t stop listening to the new Ulcerate and I have no idea what I would even write about it. Nothing comes to mind, it’s just brilliant but I can’t describe how or why. I think I’ll have to spend time reverse engineering it to truly understand it.

Charles: It defies all categorization or description.

Vince: The last time I put it on, I genuinely had the thought that this is going to be one of the defining albums of the decade. If not more. It just feels so important and vital and unique. It does things I’ve never thought of or heard before.

Charles: It feels like an album that says a ton without resorting to ‘riffs’, even though so much of it is so memorable that it pops into my head with perfect clarity and without warning.

Charles: Catchy but without clear structure.

Charles: Yes! They make full use of their instruments and skills in a way few bands do because they are very clearly using everything in their toolbox… but not in a way that could ever be described as wank, which is where so many technical and progressive death metal bands fall flat.

At this point the conversation turned onto other topics and left me with some food for thought. I’ve been looping the album almost constantly since, and I’ve developed a few thoughts I can elaborate on somewhat.

First is how brilliantly the album uses ostinato to achieve what is almost a hypnotic effect. Nearly every song section is composed of repeats of multiple measures of guitar work over top of evolving drums and vocals. Yet these sections are so complex, dense, and layered that it is easy to be distracted by harmonies and unexpected rhythms which play out across multiple repeats. The peaks and valleys of these repetitions form surprising patterns which draw your attention, causing you to lose track of how many times you’ve heard a particular phrase.

Second is how quickly the guitars move between techniques; in one repeat you’ll have a burst of tremolo, an arpeggiated chord, some palm mutes, and octave jumps, just to describe a brief moment from “Drawn Into the Next Void.” And that’s simply what I have the musical knowledge to describe due to being a guitar player. Part of the genius of Stare Into Death and Be Still is there’s so much going on musically you cannot possibly take it all in at once. Each listen provides a new hidden melody, rhythm, or shocking realization that simply listening too closely is filling your body with adrenaline.

Third is that as good as previous Ulcerate albums were, Stare Into Death and Be Still represents an exponential leap forward for the band. Perhaps it’s because this one seems to eschew the last few trappings of existing genre tropes from previous releases. Perhaps it’s the balance they’ve achieved between dissonance and harmonies. Or maybe it’s just that putting in so much attention to detail over more than a decade results in being incomparable masters of their craft. Whatever the case, I agree with Vince: Stare Into Death and Be Still will be one of the defining albums of the decade.

Stare Into Death and Be Still will be available April 24th on Debemur-Morti Productions. For more information on Ulcerate, visit their official website.

One thought on “Album Review: Ulcerate — “Stare Into Death and Be Still””