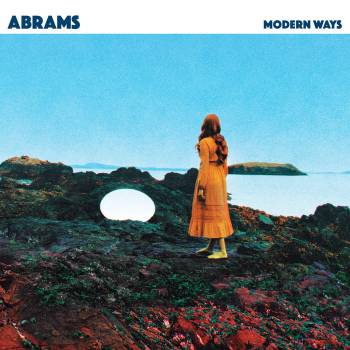 For Denver’s Abrams‘ 2017 release, Morning, I spent some time on their past and how it tied to that specific release and how with Morning the band seemed to have found its true self, all of which you can read here for context. Plus, it made my best of list for 2017. Now, with Modern Ways, their third full length, that “true self” is being fleshed out even further taking cues from Morning and expanding on its best parts to create a heavy rock album chock full of soaring melodies, hooks for days, and a slight pop sensibility just to keep the good times flowing. As high as I was, and still am, on Morning, Modern Ways is better. All my trepidation regarding whether they’d stay the course, whether this effort would top the last, and whether or not this would be a defining moment disintegrated upon my initial spin and each subsequent spin leaves my jaw on the floor.

Assuming you’ve already clicked on the link above to catch up on Abrams history we can skip the proverbial yellow brick road and get on with just how damn good this thing is. No doubt, anyone with even a halfway good ear and memory will not miss the plentiful influences on Abrams’ sound, it runs the gamut of rock and metal over a wide swath of years. But, the thing is, all these influences come across only as a fleeting sense of familiarity in a bottomless ocean full of Abrams newfound sense of self. In other words, it’s one thing to copy your heroes but it’s a whole other thing to take all that and make something completely your own which is what Abrams have done. Well, continue to do. This is the kind of heavy leaning, melodic, and hook laden rock that I miss; the kind that burrows deep in the dark pockets of the brain and won’t let go, the kind that hits the pleasure centers with a strong dose of dopamine. Hit up “Joshua Tree” and its poppy, melodic intro abutted with crunchy, riff driven choruses and silky clean vocals or the slightly meaner “Find a Way” with its incredible verses and repetitive guitar attack.

At this point, one might think “but does it have teeth?” And the answer is yes, see “Poison Bullets” for a grunge meets sludge party or the fury of “Silence” which features some of the angriest vocals of the entire album along with a heavy nod to QOTSA, which I honestly adore. Right along here it’s worth mentioning the band’s went retooling of sorts with new drummer Ryan Dewitt and second guitarist, Patrick Alberts. This retooling has made a huge impact all over this thing but nowhere better than on “Pale Moonlight,” twin guitars pepper the spotlight and the soft yet meticulous percussion colors the opening minutes here and even though soft they sound like thunder.

Lyrically, the band has grown further into their own as well. They’ve always worn their emotions on their sleeves and here it’s no different. Life ain’t easy, we all know that, and Abrams invite us into their ins and outs as if we were all old friends catching up from a long absence. Thematically, it may be a bit dark but as a whole, this is an amazing album and an amazingly fun album if catchy and memorable hooks and melodies are your thing. As for me, it is. No telling how many times I’ve ventured through these songs but if my continued play count of Morning is any indication, this album will still be going strong in the count of years and not months or days. Going back to that album for a second, it really is a great record for a lot of reasons but I’ve always had a stand out track, “Rivers.” It provided the right amount of uplifting energy mixed with the right amount of heft. But, Modern Ways is full of stand out tracks and right now there’s not a clear cut “the one” and honestly I don’t see a clear cut track forming. It’s just that good, folks.

Abrams struck pay dirt with Morning but has struck pure gold with Modern Ways. Instead of going in a different direction, they’ve refined their sound and capitalized on the shining moments from their recent past. All the hooks, the memorable songwriting, the heft and riffs, the stellar drumming, and those vocals (man, those vocals) are all just better, on another level even. No one is doing this sludgey, silky, heavy, catchy rock thing even close to the level of what Abrams is doing. No one. And, anyone that wants to try better bring their A game and pack a lunch. Kudos Abrams, this is my jam.

Modern Ways will be available May 1 on Sailor Records. For more information on Abrams, visit their official website.