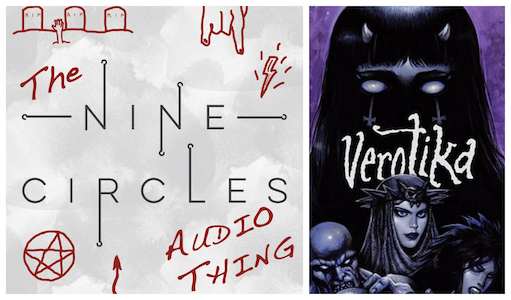 We’re back, baby! A multitude of events in this increasingly dystopian world of ours forced us to sideline Blood Red for… [checks notes] …three months… but now, with less than a month until the return of the annual Hooptober horror film marathon, we return with a doozie of a discussion on a highly entertaining, not-quite “horror,” not-quite-“film.”

Actually “directorial debut” doesn’t quite give you the full picture; Danzig directed, wrote, soundtracked and also, bizarrely, DP’d this three-part anthology, so it is his baby completely — eyeball tits, face removals and all. (And yes, both of those things do feature in Verotika.) Is it any good? Listener, it is not. But was it fun to discuss? You bet your ass it was. Join us for an at-length chat with much laughter and bewilderment.

Of note: Dan’s technology failed him yet again during recording. You’ll notice several short skips during his speaking sections, seemingly at random. Not really sure what happened there, but the good news is he’s still mostly comprehensible. (Inasmuch as he’s ever “comprehensible.”) We’ve included links to the books he mentions during the “Other Stuff” section — the titles of which were both audio-skipped — in the notes below. Sorry to all fans of books and/or competently recorded podcasts!

Anyway, jump in and give Episode 2 a listen!

Verotika is available to rent (or buy, if you’re feeling masochistic) from Apple, YouTube, Amazon and other digital outlets. It will be arriving on Shudder in September.