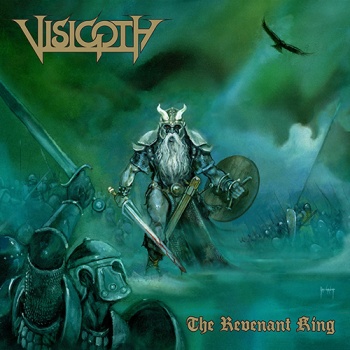 It may be a bit premature, but I’m just gonna go ahead and crown 2015 the “Year of Power Metal.” After a 2014 that saw Grand Magus defend the genre’s honor proudly with Triumph and Power, it looks like further dragon slayings are in the cards this year. Barely a month in, we’ve seen some terrific new albums from Night Demon and Battle Beast, and a new Blind Guardian album is imminent. And now there’s Visigoth, whose new album, The Revenant King, raises serious questions over whether this year can really get much better for power metal.

Who would have thought that a band like Visigoth could arise from Salt Lake City, where music is normally accompanied lap guitars, honky-tonk voices and line-dancing? Regardless, Visigoth has created a terrific set of balls-to-the-wall, testosterone-riddled heavy metal with The Revenant King. This album is burly, appropriately epic and…okay, a bit nerdy. But what else can you call power anthems about Dungeons & Dragons?

Despite opening in a relative whimper with its title track, the album gets into a nice groove with Song No. 2, “Dungeon Master.” To hell with the kids in high school who’d beat you up for toiling over unique quests for your pals to navigate through; this song celebrates you, Dungeon Master, as you were meant to be. Complete with harmonized, layered vocals that dare you to “roll the dice,” an “Eye of the Tiger”-style breakdown/buildup for the bridge, galloping double bass and screaming guitar solos, this is the song that every single D&D player heard in their heads as they laid traps for their PC’s. Pulling this kind of thing off requires a band to be utterly serious about what they are howling about, and Visigoth seems to be the real deal in that regard.

Despite being an hour long, the album flies by the way a choose-your-own-adventure book would in your pre-teen years. The third track, “Mammoth Rider” is another fist-shaking, unrelenting power anthem that fires you up deep down in your nerd soul. The vocals for the chorus punch through much like a guitar bending and sliding into the sweet spot of a melody. Much like other tracks on this album, it’s got many peaks and valleys that continually pump you up, with each breakdown giving way to a thundering, bouncing new riff. The fourth track, “Blood Sacrifice” is my current favorite. It opens with a Metallica-style soft lead guitar part, over which quietly triumphant lyrics seep like the Plains of Valinor before the song builds into yet another catchy, driving power anthem.

The production on this album is also absolutely stellar. He layers the perfect amount of chorus on all each one of Leeland Campana’s ripping guitar solos, and just enough reverb on Jake Rogers’ tremulous vocals. Furthermore, the drums are clean and tight, allowing the muted guitar riffs and harmonies to soar over the top like Gwaihir the Windlord. Credit to producer Andy Patterson (SubRosa) for his stellar work here.

You know an album’s great when you can listen to it on repeat for a few days straight and have your favorite song switch around each time. That’s how The Revenant King is. It’s almost shocking to realize that this is a debut album for this quintet.  Please put me in a medically induced coma until their next release. Then, as another standout track instructs, “raise your fist beside your brothers, stand eternally proud,” and blast this album out of your speakers, your GTO or your stereo-mounted-on-battlehorse.

The Revenant King is out now on Metal Blade Records. For more information on Visigoth, visit their Facebook page.

One thought on “Album Review: Visigoth – “The Revenant King””