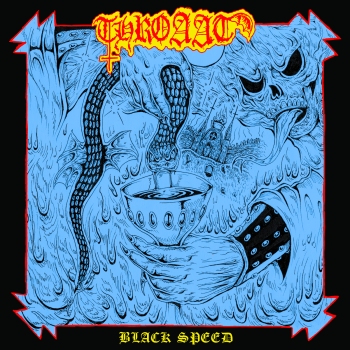 If a band’s going to close their EP with a Venom cover — especially a track like “In League with Satan” — then they’d better come correct, so to speak. Luckily for them, and for fans of blackened thrash, Brooklyn based Throaat completely back up their self-association with the inventors of the genre. Black Speed is Throaat’s most compelling release to date and definitely sets the groundwork for what should continue to be an exciting career.

Let’s get something out of the way right off the bat: yes, Brooklyn can feel at times like a sea full of hipster douchebags. Yes, some of the folks wandering around Greenpoint in Hellhammer shirts attempting to get an Iron Maiden-branded beer haven’t ever actually listened to those bands. So, yes, there is a movement of ass-hats that have replaced ironically liking Foreigner and Journey with a love of early black metal, thrash and speed metal. So it’s crucial to differentiate Throaat. With neither pomp nor circumstance, Throaat is a throwback band writing tremendous blackened thrash. With zero LPs to their name, though, the pressure is on.

Black Speed is a welcome advancement over the band’s previous EPs. Much of the fat has been trimmed. They’re no longer relying on a mimic-and-copy take on blackened thrash, and instead have become their own thing. With an array of straightforward and original thrash tunes, Throaat have, well…grabbed the genre by the throat and made it their own.

Throughout Black Speed, Throaat expertly mixes in thrash and blast beats to create a relentlessly surging ocean. On “Rampage,” the band alternates between a classic, galloping thrash rhythm and blast beats. Factor in Impurifier’s fierce, modern-sounding vocal work and the quick, come-and-go feel to these songs — most of which top out at four or five minutes — and it adds up to a terrific listen.

All told, it’s great to hear a band with such a refreshing take on thrash. And with so many bands reinventing the genre these days — and especially this year — Throaat is precisely on time.