At this point in the year, metal shows are becoming a routine occurrence for most of us at Nine Circles. Which is great, because the experiences are always worth sharing. That in mind, Dan and I had were fortunate enough to attend the same show in each of our respective cities. We’ve been talking about The Atlas Moth tour with Vattnet Viskar most of the summer, and now it’s time to recap exactly how it went.

We’re going to do things a little differently, however. With Dan attending the August 25th show at St. Vitus and myself following up with the date at The Great Scott, we’ll be breaking this review up by band. Unfortunately, I had to duck out of The Atlas Moth’s set fairly early, so I’ll be covering Vattnet Viskar in full and leaving the headliner up to Dan. So, without further delay, let’s jump into it.

This show was the pinnacle of a week that turned into an absolute blur — and a week that ended with me buying tickets to yet another Vattnet Viskar show in November. You’ll understand why shortly. Anyway, right, so last week was insane. After leaving work on Wednesday in Portsmouth, I threw back a handful of beers on the patio before hopping the train to Boston for the 9PM doors at The Great Scott. Locked in my head, journeying to yet another show as a solo effort, I arrived at the venue just after the doors opened. After giving away a second ticket I had at the door, I walked in and immediately got to catch up with Nick Thornbury at the Vattnet merch table. After acquiring a new patch and discussing the Vitus show from the night before for a few minutes, I made my way to the bar for a Peak Organic Fresh Cut (an absolutely delicious hoppy pilsner) just in time for Black Elm to take the stage for their set.

Black Elm, in short, sounded great. The Allston natives went to work filling the small, brick bar venue with their heavy, doomier take on hardcore and black metal influences. It was dark, organic, and caught the attention of all in attendance rather quickly. Playing for what must have been about half an hour at most, Black Elm made great work of the time they had and certainly left an impression. It was their night, at their local venue, and they did well in opening for the headlining acts that followed. Which brings us to my main focus point… Vattnet Viskar.

As we’ve discussed many times, forming in Plaistow, NH only a few years ago, they’ve made impressive work of the past three-plus years, cranking out an EP and then two full length albums after signing on with Century Media in 2013. Constantly touring throughout, they have certainly left their mark on the metal scene, near and far, because of their quality live performances. Nothing different here. Dan and I both had the privilege of watching them absolutely destroy a 25 minute set at Maryland Deathfest back in May, and we discussed in depth how impressively they used the shorter set, doing more in that time than many bands did in an hour. Now, this night, with far more stage time, they exceeded all previous performances that I have witnessed. And that’s saying something.

Working primarily off of this year’s Settler, Vattnet Viskar were focused on delivering a high-energy, high-impact performance. Kicking things off with “Colony”, it didn’t take long to make their presence felt. Despite Chris Alfieri taking a spill onstage in this opening track, they carried on relentlessly and with all the fiery passion we expect from their shows. Having worked my way rather easily to the front and center of the crowd, seeing explosive tracks like “Impact” take off on stage is incredibly energizing.

But what made the set so memorable was the added exploration of their discography. While it’s true they can do more with shorter sets than most, I was curious to see how a set would evolve when given the chance. As I mentioned, of course Settler was a big part of this show. However, some of the highlights were the resurfacing tracks from Sky Swallower and how well they lined up next to the newer, sharper tracks. While these are all Vattnet Viskar songs, there are noticeable stylistic difference between the two albums. Yet, the transitions were flawless. “Breath of the Almighty”, for example, was incredibly epic on all fronts, and transitioned brilliantly back to tracks like “Yearn”. This latter track, by the way, was performed with so much emotion that it quickly mesmerized the audience, serving as one of the more powerful moments of the evening. But the highlight for me had to be “Mythos”, which was introduced by Nick with a shoutout to yours truly during one of the rare moments of crowd interaction. Having followed these guys from the very beginning, and attending every show I can, it was an awesome moment.

All told, this will be a show (and set) I remember for some time. Unfortunately, with the midnight hour drawing close, and the realization that I needed to be awake in about five hours to journey right back down to Boston for work the following morning, I had to depart before the majority of The Atlas Moth’s set. It was one hell of a two day journey. A journey that included about three hours of sleep (counting naps on the train), two trips to Boston, and one beast of a show in one of my favorite local spots. And it was worth it in every sense. Vattnet Viskar, as always, delivered on every level. The visual element of their product is every bit as intense as the sound behind it and it’s an important part of what’s brought them so much recent success and popularity. Needless to say, I look forward to seeing them yet again in less than three months. 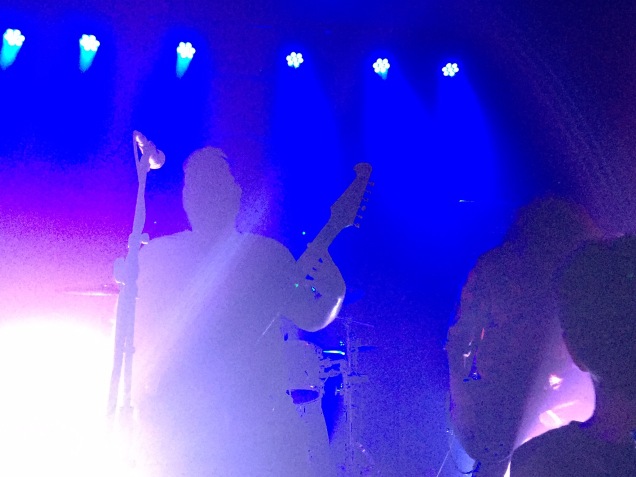 Great start, Corey. Before I get into our headliners, I’ll echo more or less everything from the previous portion of the review — with just a couple of key differences. First, in lieu of a stage shout-out, I got assurances from bassist Casey Aylward over pre-show beers (Shiner Ruby Redbirds, thank you very much) that the band would be playing about two-thirds of the Nine Circles ov list live that evening. Which was pretty cool. Also, our opener for the evening was Brooklyn band Family, and they were pretty neat. Other than that, much the same — kickass start to the evening.

But now, The Atlas Moth.

As I mentioned during a brief conversation with Kim Kelly after the show, I haven’t always “gotten” these guys. The first time I saw the band — a couple of years ago on their opening run with Gojira and Devin Townsend — I didn’t quite comprehend what I was seeing. But then last year, when they came back around with The Ocean and Scale the Summit, something clicked. All of a sudden, the immersive chaos of their sound began to resonate with me, and vocalist Stavros Giannopoulos’s versatility really hooked me in. Tuesday’s gig at Vitus marked my third chance to see the band in action, and it was without a doubt the best of the bunch.

This was all about atmosphere right from the start. A cameraman was up front filming the set, and the band left no stone unturned in putting on a good show. Against a backdrop of overwhelming blue and white light, one band member lit…it wasn’t incense, but some sort of paper or torch or something… to start things off, before a smoke machine began billowing lightly to set the mood. Then, the band began.

I’ll admit: I’m a little fuzzy on exactly which songs we got. I know they played the new single, “The 6th Passenger is Death,” and I know we got a cover of Failure’s “Golden” as the penultimate track, but beyond that, it’s a blur. Which I honestly see as a credit to the band; they were so captivating that I found it impossible to focus on individual tracks over the the performance as a whole.

Between the band’s thick, bass heavy sound and the wash of blue light that filled the room, it felt at times like a soundtrack to drowning. And I mean that as the most enthusiastic of compliments. And every once in a while, when you’d come a bit too close to falling into a trance, Giannopoulos was there to snap you out of it with a piercing vocal stab. I don’t know how the hell the dude twists and contorts his vocal cords to produce the kinds of sounds he does, but it’s a hell of a thing. 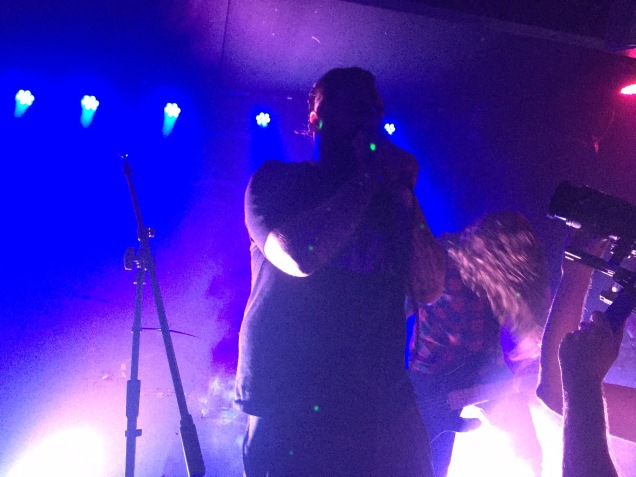 After a little more than an hour, the band wrapped things up. As the band mentioned from the stage, they’re heading back home to finish a new album, but if these were to be their last few shows of 2015, the guys absolutely made it worthwhile. Terrific set, terrific crowd and an altogether killer night out.