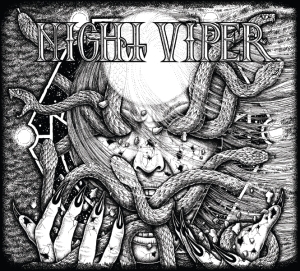 Swedish five piece Night Viper make a strong case for crashing the ‘best of 2015’ lists with their full length debut Night Viper. It’s a raucous, rowdy tip of the hat to early thrash and speed metal while incorporating the NWOBHM sound. Despite Night Viper drawing influences heavily from history, the band draws its success from the way they incorporate those sounds and influences into something exciting, fresh and new.

With the current climate of throwback metal becoming quite the commodity, a band, particularly one formed just last year, needs to hit the ground running. That’s precisely what Night Viper do from the onset of the title track and “Run For Cover.” Combining Preist’s Painkiller attitude with Metallica’s Kill ’em All thrash, the vintage riffs from Tom Sutton (ex-Church of Misery) are heavy and catchy. But it’s the pipes of vocalist Sofie-Lee Johansson that elevates the songs to another level. She goes from wailing the verses to sultrily belting out the chorus lines. There’s as much power in the vocals as there is in the twin-guitar passages.

Just as successfully as they deliver hot-rockin heavy metal the band similarly delivers when they take a minute to slow down and breathe. On “Curse of a Thousand Deaths” the haunting vocals and spiraling chords create a chilling atmosphere. Methodical percussion full of heavy cymbal usage adds depth to the already dark atmosphere. Taken on its own this would have been a good, doom-laden break in the action, but the last couple minutes ramp back up to full speed and nearly double the run-time. The band is much stronger in short bursts and this longer length doesn’t play to their strengths, instead the track tends to drag through the middle. However, as the track comes to a close they almost recover with a melodic and well played rhythm guitar run.

The sdual guitars throughout is yet another ingredient that makes this album very appealing. Grooving riffs and high flying solos all come together perfectly. As a rule on releases such as this one, the bass tends to get buried in the mix and thankfully the hard driving low-end can clearly be heard. Particularly so with the exemplary bass riffing that gets a showcase on “Dagger In Hand”.

On this self titled debut, Night Viper have created an album full of thunder and lightning. Or, more graphically and accurately, piss and venom. It’s an extremely well constructed throwback full of memorable anthems and a fisticuffs attitude. With the attention to detail here and only one slight misstep this is a successful starting point. An album that will leave the most hardened traditional metal fan with an ear-to-ear grin.