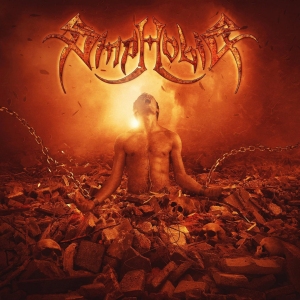 I always regret going back to my hometown in small-town Ohio for a reason: It’s at least 15 years behind the curve of, well, everything else. Going to my hometown is like stepping in a time capsule that only goes to the absolute worst parts of the early 2000’s. Sinphobia‘s debut album Awaken conjures the same emotional response from me as going back to my hometown. Equal parts bone-headed “death metal” (e.g., groove metal) and tough-guy metalcore (with breakdowns!), it’s not just derivative — it’s like they collected all the throwaway riffs of every second-tier metalcore act from a decade ago, threw some layered growls on top, and decided to call it death metal, all while writing piss-poor songs in the process.

I’ll admit that I picked an easy target. One of my writing resolutions for 2016 was to cover more than mopey sad guy metal, especially since there were death metal albums in 2015 that I enjoyed a lot. When I saw the genre tag in our planner — “horror death metal,” grossly inaccurate — I snagged this promo. That was a mistake. A horrible, irreparable, mouth-agape-in-horror, hindsight-is-brutal mistake. I guess the band name should have been a dead giveaway, if not the artwork Straight Outta 2002®. I soldiered on, though, thinking, “It can’t be THAT bad.” It was, dear readers.

As a self-aware bumpkin who is mostly ignorant to the ever-changing tide of what bands and labels are popular in current metal –– I’ll stick to my trusty standbys, thank you –– Awaken still sounds horrifically dated. The clearly sample-replaced drums, the one-note breakdowns and staccato riffs, the attempts to maybe have some semblance of death metal (see “Thread of Salvation”) but not quite venturing outside of the melodic minor scale, and the nu-metal grooves all take me back to the worst of local shows in high school. “Respect” is the absolute worst offender, with a half-growled refrain of the song title over a trite, start-stop riff, and “Face Your Mirror,” aside from the god-awful repetitive lyrics and being far too long for its own good, is a sloppy mish-mash of palm-muted chugs, pseudo-Pantera tough guy posturing, and forced attempts to be technical –– the transitions here are about as arbitrary as they come. This statement applies not just in this song, but is also a blanket statement for the album’s remainder.

Some albums can sound dated and still be perfectly charming, but Awaken is not among them. Weak songwriting is its major flaw, and the in-the-red, horribly distorted production makes it even worse. In their attempts to be The Toughest Guys of 2016, Sinphobia pushed every element past an acceptably polished threshold: The guitars are audibly clipped throughout, and the already heavily digitized distortion is pushed into a wall of crunching static as tinny, triggered drums peck away just as loudly. To be fair, the execution is spot on, but that’s a moot point in the context of how bad the songs are, and doubly so when the production makes it close to unlistenable.

I’m gonna go listen to Brian Eno to center myself after having to endure this mess. Avoid Awaken at all costs unless you’re still the type which consumes Rockstar by the bucketload and wants to see “jumpdafuqup” included in the next edition of Webster’s.

Awaken is to be released on 02.26.2016 through Bakerteam Records. For more information on Sinphobia, visit their official website or Facebook.