On a particularly cool June evening, I headed to Greenpoint’s metal mecca, Saint Vitus Bar, to catch a pretty stacked bill for Northside Festival (this show presented by Noisey): Yellow Eyes, Couch Slut, Tombs and Dälek. The highlight of the bill, and the reason for my attendance was Couch Slut. So, despite three other brilliant performances by bands you should support, give money to, go see and generally praise by thinking about them as you drift off to sleep, we will cover Couch Slut’s set in this review. And, if you’re wondering, my night started off at Tommy’s Tavern where Miller High Life is both affordable and cold. So, the words that follow are heavily influenced by that experience.

With another album on the horizon (and a potential split) and My Life as a Woman now pretty much a staple in everyone’s vinyl collection, Couch Slut have amassed a very dedicated following. Heck, they nearly broke the internet due to Bandcamp sales. Chatting up the crowd it was clear that many people had come to the show specifically to see Couch Slut. Which means that they were, in some way, connected to Couch Slut’s vocalist Megan Osztrosits. Her magnetic personality, uncompromising lyrics and general realness as a human attracts people from all walks of life. Particularly women. It’s actually a boon to put them on a show with metal bands as plenty of people in the crowd expressed a growing interest in loud music using Couch Slut as their intro. The crowd was thick, a wall of human beings excited to see what was about to take place. And they would not be disappointed. 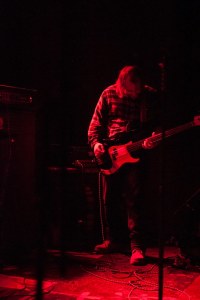 While Megan might be the highlight, thrashing around on the bare plywood floor of Saint Vitus, the guitar performances turned in by Kevin Wunderlich, now the sole proprieter of the six string (Epistasis, @KevinWunderlich), was brilliant. Any fear about the departure of his battery mate can be put to rest. Kevin Wunderlich can handle the guitar on his own. The other Kevin, (or maybe the original Kevin—it’s hard to tell) Kevin Hall (@berniemccrib) banged it out on on bass, Theo Nobel, shirtless and surprisingly not as sweaty as you might expect given his extreme talent, kept perfect rhythm on the cans. 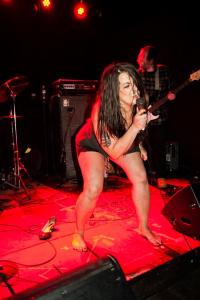 Merely reading Megan’s lyrics is enough to give anyone chills. But to see her perform it live is another experience entirely. To actually stand in the crowd and be sprayed with beer, spit and whatever else flies out of her, is another experience entirely. To say that she gives it her all would be an understatement. Involving the crowd as punching bags, walls to scream at and generally treating concert goers as the enemy is a particularly daunting experience. At times snatching full drinks from the hands of audience members, Megan reclaims some of the more horrific experiences in her life merely by saying “this is mine now.”

The bill consisted of four bands but only one female performer. Given her lyrical content, the sea of men and the odds being stacked against her, Megan put on a brilliant performance. Lashing out at the crowd while unleashing her innermost demons. Using different men as a wall against which to bang her head, screaming obscenities, demands and threats it’s almost shocking that the crowd remains so close to her (an absolute testament to her charisma). Her anger is palpable, thick like a winter’s gravy yet the crowd absorbs it, shares it with her and helps it dissipate.

If you don’t leave a Couch Slut show looking like Megan’s face below then you haven’t done your job. The audience should leave the show more than a bit shaken. It’s just that kind of performance. As Megan grabs her purse off the stage and marches out (before the set is completed) a piece of each audience members soul goes with her.

The set list responsible for doing that to Megan’s face was: “Split Urethra Castle” from My Life as a Woman, followed by “Funeral Dyke” and “Company Picnic with Dust Off” and “Summer Smiles” from the upcoming LP, and a brand new song, yet without a title, from an upcoming split with Microwaves on Sleeping Giant Glossolalia.

Another huge thanks to Caroline Harrison for her photography.  Be sure to follow her on Instagram (@carolinedraws) and check out her art at her official website.