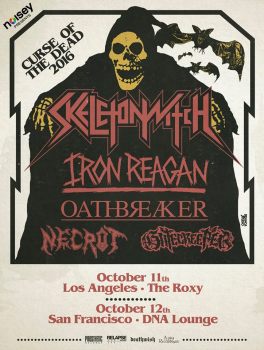 Welcome one and all to In the Flesh, a feature dedicated to the best live music our staff has borne witness to. Last Tuesday, October 11th, I had the pleasure of catching the mighty Skeletonwitch in the historic Roxy Theater in West Hollywood, CA. Skeletonwitch were joined on this tour by death metal up-and-coming sensations Gatecreeper, the bay area’s Necrot, Belgium’s Oathbreaker, and crossover institution Iron Reagan. You may think that a five band bill on a Tuesday night could be considered some form of masochism but with a lineup this packed with talent there is no way I could risk not seeing this, and it ended up delivering on all that was promised.

While maybe not the easiest venue to commute to (at least from where I live) the Roxy has always been good to me, and I appreciate the history of the building, being one of the big name clubs on Sunset Boulevard where many bands have made a name for themselves. The relatively small space gives performances a more personal feel, the sound is always on point, and the venue bar even offers a proprietary golden ale that is quite enjoyable. After bumming around and acquiring the merch I had my eyes on (which I always like to do at the start of a show) it was time for the real action to begin.

Gatecreeper kicked the evening off with the intensity of a shotgun blast. The band’s debut full length Sonoran Depravation has been getting immaculate press, and for good reason — the band’s take on no-frills old school death metal is punishingly heavy. Having been a fan of this band since first hearing their self-titled demo, it’s great to finally see them getting the attention they deserve, and they certainly aren’t going to be losing any fans due to their live shows. Gatecreeper put on an immense performance and were an absolute joy to watch. Ripping through the best bits of their new album, the entire band kicked out massive riffs with laser precision, and everyone looked like they were having a blast on stage. By the way the crowd broke out their best pit moves it looked like they were all enjoying it too.

After Gatecreeper came Oakland’s Necrot. While not initially included as part of the tour, the band replaced Homewrecker for two gigs in Los Angeles and San Fransisco, so I was lucky enough to be one of the few people to witness this version of the tour lineup. I was unfamiliar with the band’s music prior to hearing them live, but their brand of crusty death metal won me over, and provided an excellent counterpoint to Gatecreeper’s prior set. Despite only being a three piece band, Necrot’s sound was huge, and they kept everyone in the Roxy in rapt attention as they spit forth riff after filthy riff.

Next up was Oathbreaker, a band that was one of the reasons I ventured out on a work night in the first place. It’s no easy feat to be able to tour the US if you’re not FROM the US, so when a band I enjoy is able to make it over from Belgium, I drop everything and make it a point to support them. Oathbreaker’s Rheia is a gorgeously haunting album that, while suffering a little from pacing issues, is one of the most memorable things I have heard this year. The songs translate beautifully live thanks in large part to the stunning vocals of Caro Tanghe. Sticking to most of the faster songs from Rheia, plus a few older tunes thrown in for good measure, Oathbreaker tore the stage apart and left the entire venue speechless.

The penultimate performance of the night was Iron Reagan. Despite the pedigree of the musicians involved in this band, somehow I had never listened to them before, but I feel as though that may have worked to my advantage. A band with as much energy and enthusiasm as Iron Reagan needs to be seen live to be truly experienced, and their set was pure fun. Even in spite of breaking a snare drum head early in their set, the band were cracking jokes and keeping the audience engaged in between belting out fiery crossover hardcore mosh anthems. I will definitely be checking more of this band out, and catching them live again whenever I can.

Finally, the moment everyone was waiting for: Skeletonwitch took the stage. Back with new vocalist Adam Clemans of Wolvhammer fame (among a vast number of other projects including the incredibly underappreciated Shaidar Logoth) Skeletonwitch sounded like a band renewed in spirit. Their set included new songs from The Apothic Gloom in addition to many fan favorites from across the band’s career, serving as the ultimate proving ground for Clemans to show fans what he brings to the band’s dynamic. He absolutely nailed the performance, old songs and new alike, and kept the energy level high for the entire set. The rest of the band played with the laser precision that has come to be expected of their live shows, and showed that their time, seemingly in the shadows, was not spent lazily. By the time they were finished playing, everyone was exhausted, sweaty, and jubilant, exactly the way anyone should feel at the end of a good show. If you still have a chance to catch this tour in your area do not miss it. It is well worth your time, even if you think five bands on a bill is too much.