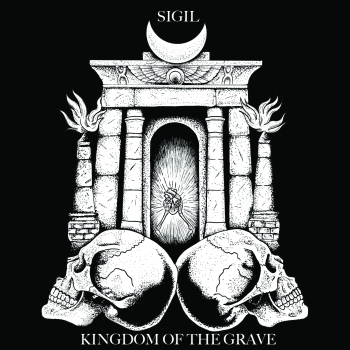 Sigil‘s debut album, Kingdom of the Grave, is a fun little thing. Perhaps that’s to be expected when your core sound combines Wolverine Blues-esque death metal with crusty, D-beat-driven overkill, as is the case with these Texans. Still, putting the pieces together on paper and doing so on a record are two entirely different phenomena, so it’s to the band’s credit that they’re able to walk the walk on that count. Despite some notable shortcomings, it’s ultimately a decent album that’ll put a big, stupid grin on your face and make you want to jump in the pit and thrash about.

I doubt this was the band’s intent — at least not fully — but at times, Kingdom of the Grave feels like an attempt to see just how many hooks the band could cram onto a single album. Well, mission accomplished. The general rule of thumb throughout this thing is that each of its eight songs has at least one point where the band pushes what I’ll call the “Oh, fuuuuuuck” button, catapulting the listener into a frenzy with a catchy riff or refrain. (This is the kind of thing that also made Ghoul’s Dungeon Bastards so much fun last year — obvious sonic differences aside.)

On the album’s thrashiest cut, “Even the Gods Will Burn,” that moment comes during the gang-vocal-esque chorus. Later, on “Bloodvisions,” it hits during the repeated, ascending riff that occupies the refrain. Many of the songs have more than one such “oh, fuuuuuuck” moment, making these 33 minutes a treat for both your ears and your neck muscles. And by the way, kudos to Sigil on that last point, because 33 minutes is exactly the kind of length this album needs to be. It gets in, kicks some asses, and gets out.

But what ends up tripping Sigil up is their editing — or, more accurately, their lack thereof. For one, that abundance of riffs we covered earlier doesn’t always translate into cohesive songs. Take “Lick the Blade,” a nice, kind-of “ease off the gas” moment, where the band injects a few hints of groove after the relative fury of the opening two tracks. The trouble is, the pinch they throw into the verse is jumpy and nimble, while the chorus gets one that’s a bit more lumbering. As a result, the band’s ambitions are dashed by two grooves that feel cherry picked from different songs.

Similarly, opener “Death Unreal” is a good song that could have been a great one with a bit of a trim around the edges. It’s one of those multiple-“Oh-fuuuuuuck” songs, with absolutely ferocious verse and chorus sections and a chaotic, slow-building bridge part that, in an ideal world, would have marked the end of the song at a little past the 4-minute mark. Instead, it goes on for another minute, revisiting the chorus that, suddenly, feels a little tame and anticlimactic in comparison.

But in the end, the fun does outweigh the not-quite-as-fun on Kingdom of the Grave. You’ve probably heard variations of some of these riffs before, but seeing new light in this Texan death-crust context makes them worth revisiting. If the folks at HPGD implement a couple of more rounds of revisions next time out, then Sigil might just be onto something.

Kingdom of the Grave will be available April 7 on Horror Pain Gore Death Productions. For more information on Sigil, visit their Facebook page.

2 thoughts on “Album Review: Sigil – “Kingdom of the Grave””