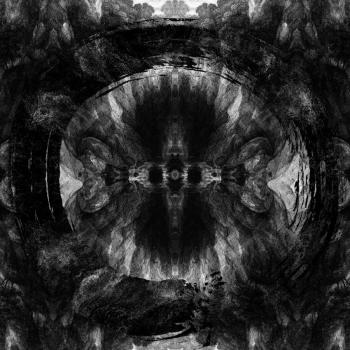 Sometimes when discussing a bands newest release, it’s crucial to speak about their history to provide the reader with a proper understanding of what they are getting into.  Architects were formed in Brighton in 2004 by twin brothers Dan and Tom Searle.  Through their formative years they mixed and matched various styles of metallic and hardcore musings until they really found their footing on 2014’s fantastic Lost Together//Lost Forever.  Following up with the monstrous All our Gods Have Abandoned Us, Architects were on a mission that seemed unstoppable.  Then, tragedy struck the band in 2016 with the untimely passing of founding member/guitarist/main song writer Tom Searle.

No one would have blamed Architect’s for calling it a day after such a loss.  However, they have soldiered which brings us to their eighth and latest album, aptly titled Holy Hell.  It represents a band rising up from the darkest depths imaginable.  Putting iron to forge, Architects have manufactured a musical amalgamation that unfolds in waves of visceral anger, desolate sadness and in venturing to such depths, finds catharsis.

Opener “Death is Not Defeat” isn’t your usual Architects barn burner, instead opting for a more somber mood with its mid song piano interlude bringing swaths of sorrow to interplay with Architects patented hardcore rhythmic breaks.  “Holy Hell” brings out a more metal side of the band, utilizing a furious double bass rhythm to close out the song.  Midway thru the eleven track album “Royal Beggars” changes the mood with a more pop oriented slant that showcases vocalist Sam Carter’s unique vocal delivery upfront and personal.

Holy Hell hits many nails right on the head, keeping most of the band’s signature moves through hard core and experimental metal in full.  If I have any critique it’s that I found Holy Hell lacking a bit with the amount of break neck tracks the band does so well.  Which, depending upon your preferential version of Architects, will determine how often you revisit Holy Hell as the mid album stretch does set in a bit and there isn’t a ton of variation on the B side of the album.

In the end, Holy Hell isn’t about a band making a good or bad album, but about a band healing.  Lesser bands would have folded and fewer would have made an album as brave as Architects.  While I can’t say it’s a perfect album, Holy Hell gives us a direct view of where Architects are at here and now, and for that, heavy music is all the better for it.