In sharing a common theme, Louisiana’s WOORMS and India’s Orchid are out there on the spectrum of tripping the light fantastic. One does it with mind melting sludge and noise while the other does it with mind challenging technical ecstacy in the form of the avantgarde and extreme. So, for this Second Circle we’re taking a look at Slake and Miasma and how it would be best to take both in separate listening sessions so complete brain corrosion is avoided.

A band like WOORMS could only come from Louisiana, the birthplace of some of the vilest sludge known to man. And Slake, their debut full length, could only come from a band like WOORMS. Let’s back up a sec first. After a disjointed and cumbersome intro that lead into the opening moments of “Find a Meal Find a Bed Find a God,” my mind was thinking that this would be yet another Sabbath worshipping Electric Wizard heaviness having lump of the same ol’ same ol’. But then the vocals came to light and I thought “wait, this is Melvinsesque and I need to slow my roll before skipping ahead.” Good thing, as that’s exactly when things got weird and good and raised the hairs on my neck with its noise inflected zap of energy. But, that’s not all; as the song rolled on, sludge and doom and *gasp* groove crept in making what I was hearing ultimately better than how it initially presented itself.

The disturbing opening to “Veni Vidi Fucki” gave way to very odd time signatures and ocean trawling depths of low end sludge coupled with some real ear worm lyrics – the kind that just won’t leave, even with an exorcism. Later, “Urine Trouble Now” turns up the noise rock intensity and even tickles the ear with hardcore screaming. “Rise Crispy” rewinds the clock to Houdini era Melvins rather well without being a direct ripoff and “Sore Afraid” draws the curtains on Slake with some of the most straight forward abrasive riff-rock of the whole album. I must mention “Our Lady of Perpetually Shitfaced” as one of the weirdest bridges between tracks ever. It takes some balls to put some drunk dude on blast where your music should go but it strangely works in the midst of all these scattershot genres that lean the heaviest on sludge. At a shade over 30 minutes, this thing never drags and keeps a hand gripping the volume button to make sure not to miss what comes next. Is it enough to warrant repeat listens and return trips a few months down the road? That I couldn’t tell you, yet. But I can tell you this was the strangest journey I’ve had recently and WOORMS scratches several itches of mine at once: noise, sludge, doom, and all out craziness. For that, they’ve succeeded in my book and enough so that the first few minutes are forgiven.

Slake will be available January 18 on Hospital Records and Sludgelord Records. For more information on WOORMS, visit their official website and Facebook page. 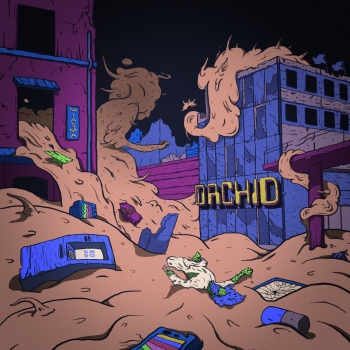 Just like any other tag that gets thrown around with little regard these days, avantgarde metal gets pinned on nearly any band that’s not so easily classifiable but it is an accurate way of describing the freak out, balls out, technical nature of India’s Orchid on their Colin Marston mastered full length Miasma. Going back to their S/T EP, this really shouldn’t come as a surprise since its four songs were some of the most intriguing and skillfully executed prog-death-technical-wizardry-meets-skull-splitting-loudness that happened in all, or most, of 2016. The more you know, right? And who knows, this might be what led Marston to master Miasma – Gorguts were trailblazers is all I’m saying, in case you missed it. Moving on to the point: based off the two tracks currently featured on their Bandcamp page, Orchid have hit the same stride here but up the ante, and horns, in the songwriting department and somefreakinghow also up the ante on their technical proficiency – as if it needed any work to begin with. “Master Supreme” is a minute and change of freak out techgrind with throat slit vocals and “Zero-Sum Game” adds mathcore to the mix along with intricate guitar-drum interplay not unlike BTBAM or even Dillinger some years ago.

For the tracks you can’t hear yet, and there’s plenty, “Obsolescence” rages with slow-burn rage while “Dead End” puzzles the senses with its irregular rhythm patterns and prog beatdowns. But it’s in the all encompassing “Sugar Pill” where Orchid really tickle the senses with their off kilter brand of math-tech-jazz fireworks. Same for “Disassembly Line” which hits the uncomfortable button by way of being screamed at for nearly 4 minutes but weirdly enough, it’s cathartic. And that’s precisely where the genius of this band lies: their ability to gutpunch a generic (learned) sense of melody yet manage to completely engage with their amazing songwriting skills. Difficult listen for sure, but necessary to anyone specifically looking for a challenge and seeing as challenging extreme music is on the rise, Orchid easily keep their lofty position, in this field of extreme, intact on Miasma.

Miasma will be available January 10 via the band’s Bandcamp page and Instamojo. For more information on Orchid, visit their Facebook page.

One thought on “Second Circle: WOORMS and Orchid”