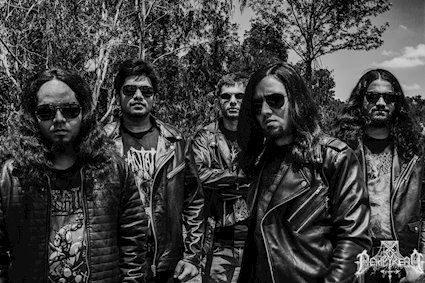 India’s Aempyrean released their death thrashing EP Fireborn late last year and the tremors of said EP can still be felt. Yea well, that was probably over the top but in all seriousness, these five tracks are savagely divine. Plus, any band that can pull off a wicked, top shelf cover of Morbid Angel’s “Chapel of Ghouls” on their debit outing gets a serious vote in my book. For those that like their death and thrash metal blackened and uncompromising, Fireborn is the cure. We recently had the chance to ask vocalist B.R. our set of Profile questions so head below to see what he had to say and if you missed out in December, now’s your chance to rectify that with the links included. 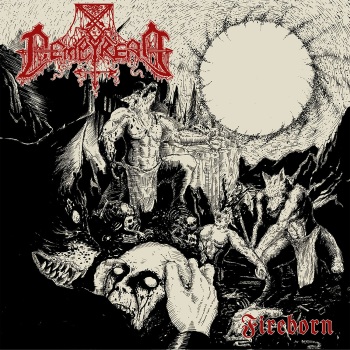 Greetings! I suppose it’s the usual slippery slope – being obsessed with heavy metal as a teen, getting into more extreme forms of metal gradually, collecting records, attending local shows and finally forming our own bands. It was almost inevitable.
As for success, even if it is defined as achieving what we set out to, the answer would be no. We have a long way to go and a lot to say, and we’ve only just got started.

Honestly, I don’t believe we’ve ever compromised on our integrity for gigs or promotions, and I doubt we ever will. In fact, every gig we’ve played thus far, it was the promoters who approached us and not the other way around. As far as funny/embarrassing stories go, we don’t have much of that either. It all involves copious amounts of alcohol or other intoxicants, so it gets hard to remember anyway.

Great things – lots of bands playing classic and extreme metal, and a real throwback to the ’80s and ’90s style of songwriting and production.
Worst things – Deathcore/metalcore still seems to exist and some of these modern brutal/slam/tech death bands don’t sound too different from that garbage either. And then there’s Ghost too, haha.

Let me be very clear when I say this – Aempyrean is a band that plays black/death metal with lyrical themes of war, violence, the occult, etc. This entity is not a vehicle for social/political agendas and we have no “causes” as such. That being said, part of our lyrical themes deal with human weaknesses (in this context, following organized religion, taking political sides, campaigning for flavor-of-the-month social causes – you name it) exhibited by the “clayborn” and the need to rise above it, be rational and do whatever it takes to achieve what you set out to. Following the herd and taking sides with these distractions mentioned above only gives people a false sense of strength (in numbers), and results in a loss of critical thinking and reasoning – all this, while being pawns in somebody else’s games. Personally, I believe social/political causes have no place in extreme metal.

A classmate of mine in 8th grade got me into this music, actually. I must’ve been 13 years old. It started with Metallica, Deep Purple, Black Sabbath, Iron Maiden, etc., but a lot changed when we came across Slayer and Sepultura, particularly the former. From there on, there was no looking back. My family initially thought it was weird and they couldn’t understand this music (typical coming from a traditional Indian family) and hoped it was just a phase. Then came disapproval and opposition because I was spending too much time (and money) on this music. That was almost 20 years ago. I suppose most of the metalheads from here, particularly my age, have similar stories.

Simple – be objective and well-researched about the band/genre.

Most of us in the band have regular jobs except our drummer, Avi, who’s a full-time musician. He’s a multi percussionist and a drum instructor by profession.

There is a line-up change that we’ll be announcing shortly. Also, we’re looking to be more active with playing live in 2019 as we also start writing again, this time, for a full-length hopefully.

Many thanks to B.R. And Aempyrean for their time!