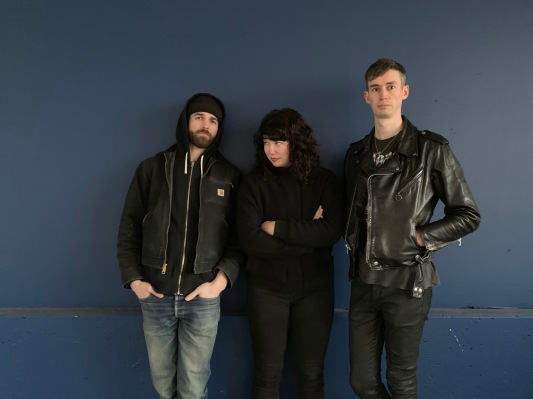 For clarity; I am ridiculously late with this thing AND to this band. But the beauty of it is that on a recent journey up through the mountains and backroads of SC and NC, purposefully lost, “Who Lives Who Dies Who Cares” – second track off Come, Annihilation from Seattle’s punk/hardcore/metal trio Prison – came up in a random playlist and I was floored. So much so that I stopped the car and dove in like a fiend looking for that next fix. A full three spins later — it’s an EP man, 11 minutes to get through — I still couldn’t pick my jaw up off the rocks of the overhanging cliff I was, by this time, numbly peering off of. It’s got that feeling of some sweaty ass basement punk show, the kind you never can seem to find anymore. It’s equal parts grunge, noise, punk, hardcore and metal but most of all it’s that diamond in the rough that forces you to stop, put everything down, and take in all its glory (similar to the first time I heard the Melvins). As stated, this is way late so back in March we had the chance to shoot over our set of Profile questions to the band for some details and Kris (drums) responded with some enlightening answers and a boatload of recommendations so head below for an interesting read and please get yourself a copy from the links provided.

This is Kris. I play drums in Prison and will try to answer on behalf of my bandmates.

Each of us got into playing music in basically the same way. We loved listening to it, loved seeing live music played and we wanted to do that. As a group, our success is way more dependent on the health of our collective friendship and the fun we’re having than it is on how much we’re making a night or whether or not the internet loves us. In that regard, yeah, we’re wildly fucking successful.

We’re answering canned interview questions via email on this cycle, so that’s pretty rough stuff. Intentional self-effacement at live shows is a pretty standard thing for us.

There’s always a ton to be encouraged by where music is concerned. As far as our city goes, Seattle has some really really rad and diverse heavy music happening right now. The city obviously has a history of obvious, popular guitar-oriented music with pseudo-punk or DIY ethics, but I don’t know that most locals who play heavy music are as influenced by Nirvana as they are by Botch or Melvins, you know? Of late, development and income inequality in the city is making it really hard for punks and longhairs in bands to exist here, but there’s still a ton of gritty, powerful, rad music surviving despite fewer places to practice and play. Off the top of our heads, some Seattle bands you should check out are (in no particular order) Into the Storm, Sandrider, Fucked and Bound, Hissing, Turian, Pisswand, Florida Man, Procedure, Endorphins Lost, Old Iron, Great Falls, Un, X Suns, Regional Justice Center, Cat Toy, Heiress and Voycheck.

We’re anti-capitalist leftists opposed to neoliberalism. We’re atheist. We’re feminist. We believe Native People, POC and LGBTQUI folks all deserve thoughtful, respectful allyship and support. All of that informs our music and our personal lives and individual perspectives.

I can’t speak for my bandmates, but I was drawn to negative and sad music early on. I grew up really religious and attended Christian church schools until high school.  I got into punk-oriented music via the Tooth & Nail Records bands that were stocked at the local Christian book store, but I graduated from MxPx to 90 Lb. Wuss to heavier stuff kind of however I could. Eventually, I got into metal via hardcore.  My folks weren’t pleased back then, but they’re pretty supportive of my creative efforts because they know I love it.

More than anything, write about local shows and local bands and local labels at least some of the time. The quest for clicks has so many writers focused on the low hanging fruit of national or international touring acts, forcing every blogger or YouTuber or online entity to look outward into the world to try to cover what’s going on for a broad set of viewers. Meanwhile, there are a lot of really vital bands that can’t get 40 people to show up in their own hometowns.

Our goal for Prison is to be friends and to love and support each other and continue to write, record and perform songs we like. Gwen’s also playing bass in a NWOBHM band called Demonhammer, and I’m playing guitar in a hardcore band called Isdal. Zack writes fiction.

When you’re not obsessing over your own material, what are some of your favorite albums to listen to currently? (Feel free to include non-metal).

We’re working on touring on this EP and we’re already writing the next thing. For Seattle area folks, we’re doing a free record release show at the ChaCha Lounge on the 28th. The lineup is fucking rad and includes our friends in Into the Storm, Voycheck and Procedure. I just spent the afternoon cutting out a shit ton of Bandcamp download cards, so everybody who shows up gets a digital download and a fucking high five. (Ed: obviously this show has already happened, we hope it went well)

Support. We’re our own little support group, first and foremost.

Many thanks to Kris and Prison for their time!

Come, Annihilation is available now on the band’s Bandcamp page. For more information on Prison, visit their Facebook page.

One thought on “Profile: Kris from Seattle’s Punk Metallers Prison”