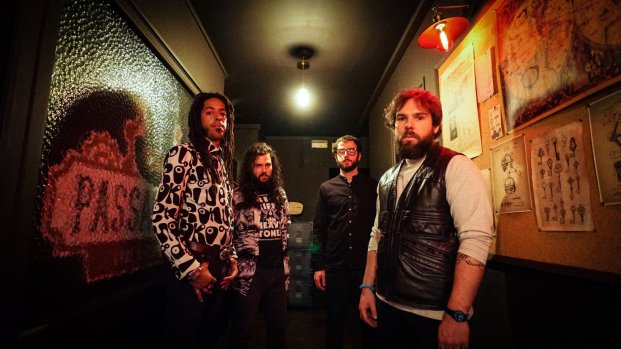 On the heels of an unfortunate label debacle and a lineup change or two, France’s Bright Curse have returned with a stunning second full length of doom laden, hazy psych rock. The addition of exotic instruments and longer jam sequences finds the band separating itself from their more rock heavy debut but also with a more mature ability to just let their dreamy sequences go wherever they may lead. Jazz, in particular, is known for that kind of spontaneity and on Time of the Healer Bright Curse show they have much more to offer than just spaced out riffs. The album came out back in May and between then and now we had a chance to ask Romain Daut (guitar, flute, and vocals) our set of Profile questions to which he was very generous in his responses. Head below to see how it went down and grab yourself a copy from the links contained within. 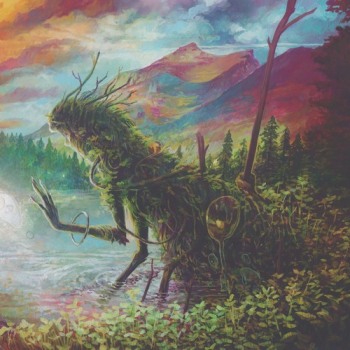 How did each of you first get into playing music? What, or who, got you into heavy music and how old were you? How did your family and friends feel about it?

I was about 16yrs old and really into sports. I was playing handball at school and in a private club, team captain, etc. Then one day my parents took me to Brittany for summer vacations.I remember the place was near Carnac, there was a small lake next to our camp and people were fishing all the time, I was always running around, not caring about those old dudes sitting on their benches waiting for a fish to bite his death. The lake was open day and night and one night I was training on the grass and I heard a guy shouting from the tennis fields, opposite to where I was. I ran to the place, thinking someone was in trouble, when I arrived, the guy was actually playing guitar, singing a song about a girl called Polly, she apparently wanted some crackers… That guy’s name was Manu, he looked good man, he had long hair, a broken voice, and some mysterious vibe surrounding him. I sat there listening to him singing. Thing is that there were girls there too… Actually, I was the only guy besides Manu. I went there a couple more times, every night actually, and at some point we became friends. I bought a Djembe so I could do some percussions in his show…

After two weeks we had something really good going on, and I realized I was a pretty good singer and started singing lead vocals, only covers except for a song Manu wrote called “Les couloirs de la mort” (I’ll leave it to you to translate that).  We were leaving our tents at night to go to the nearest bar and play for the people there, we couldn’t get beers as we were 16 but the lemonade was good enough. On week 4, I went back home, I didn’t keep in touch with Manu or his band Mr Bu.

But I bought a guitar and started learning, and I was less and less training with the team, more and more staying on benches, waiting for the girls to bite.

It seems that now everyone has a passion for some cause and that those people are very open about displaying their passions. This is probably a very, very good (and progressive) thing socially. What are some of the most important issues (social/political/humorous/etc.) for you, and how do you insert those issues into your music?

I am a sailor and a traveler, spending a minimum of three months on the road every year. Now it’s been maybe four or five years, and I can really see the difference, we (humans) are literally killing our own environment, annihilating our planet, we are sucking her power dry, draining her life. When I sail, I see plastic floating around my boat, when I dive I see fish using plastic bottles as houses and all the dead coral is literally making me cry every time. When I walk I see all the pollution from rubbish changing my favorite mountain landscapes… I could carry on but I think you’ve got the idea. The whole Time of The Healer album is talking about those issues. Earth created an entity to kill all human beings as an ultimate solution to the problem, as in, “kill them to save them.”

All is explained here.

What’s your goal? You guys thinking world domination? Saving a continent, or maybe invading one? Tell us what you’re aiming for with this band.

My goal is to play music, and write as long as possible, maybe when I’m old I’ll open a club and invite all my friends, because in the end it’s all about Jazz… and Heavy Metal… and friendship… and Heavy Metal.

Currently I listen to a lot of Young MC, Scott Atunde, I really like the new Billie Eilish album, (that’s kind of a guilty pleasure) it’s fresh and really dark.

Black Midi, Maiden, Elder (I love them), and Orchestra Baobab. Recently I’ve been listening to a lot of Bill Withers, my daughter loves it!

What’s the most you’ve ever debased yourself to get your band onto a show, into a magazine or otherwise promoted, covered, and praised? (If you don’t have a story, tell us any funny/embarrassing story about the band.)

Once, JB was playing bass and we were touring in Europe. After a show in Paris, he took his shower and our friends from Domadora were on stage, JB didn’t know that everybody could see his dong when I pulled the towel and he started dancing naked as he was watching the band from backstage. Loads and LOADS of pictures got taken. Good press coverage that day.

What do you see as some of the great things happening in heavy music right now?  What are some of the worst?

One of the great things is that there are a lot of people booking bands out there, and even a small band like us can manage to book a Europe tour if you know the right people. You won’t earn any money, but those holidays will be some of the best you can hope for. On the other hand, a bunch of big festivals are kind of ruining it for smaller bands. They always book big bands, always the same bands as well, they don’t take any risks. And I know taking risks can be dangerous, they also have to pay rent, but I guess if you want to be sure that you’ll have enough money at the end of the month, you are in the wrong kind of business.

What advice do you have for music critics and outlets out there? How can we all better serve the genre in the eyes of a hard-working musician?

No but really, I hate reading a review were all the songs get compared to other songs from bigger artists. Time of The Healer is a good album, I know it, but people are sometimes struggling to find other bands/albums to compare it to, and I have the feeling that some critics find it hard to talk about it because of that… bullshit, use your own words, use your imagination, tell us what you feel. Me for example, I see colors when I write or listen to a song. It creates patterns, sometimes they match, sometimes they don’t, but I don’t like to compare patterns.

What is the 12-month outlook for you or your band?  Any specific events on the horizon that the masses should be aware of?

I’m looking for a new booking company to work with for next year. I’m moving to Lisbon (Portugal) and the other members of Bright Curse are in London (UK), so we are looking for someone to book us tours, we can’t really do a couple of shows here and there anymore. I started writing the next album already, this time I decided I wanted to start with the lyrics. I also started a new project where I play trumpet and sing in french, but I can’t talk about it more than that yet.

Many thanks to Roman for his time!

Time of the Healer is available now on Ripple Music. For more information on Bright Curse, visit their Facebook page.