Death metal has seen a banner year. And, it’s seen a year that clearly divided the genre into swampy caveman ooze and extreme for the sake of extreme. Basically, whatever is your preference is out there and your favorite album awaits. This is the year for death metal fans and that’s the bottom line. Yes, I do realize we’re closing in on EOY season but for us, all that fun is held until, you know, the end of the year so why not broach some of the good shit now? Rhetorical, of course. As a reminder, last time we did this was for black metal and it was a silver platter of offerings so be sure to revisit that. Moving on, we do have rules for this piece. I hate rules. But, the only one for this Nine Circles ov… is that anything covered here can only be albums we haven’t covered in long form which leaves out Vitriol, Fluids, Tomb Mold, and several other holy-hell-top-notch albums. Be that as it may, there’s tons here to dig into from 2019 so get your shovel and dig until you hit the coffins.

Coming in hot with the first pick is Ohio’s Sanguisugabogg and their debut EP Pornographic Seizures. Yea it’s an EP and yea it’s four tracks, so what? This thing rules. “Perverse/Deranged” spews forth with neanderthal grooves and ghastly vocals while “Turkish Blood Orgy” wrecks the set with speed and fury but never loses sight of its caveman mentality. Remember the whole syncing up Pink Floyd to Wizard of Oz? This EP would sync up well to Texas Chainsaw Massacre and honestly that’s on the to-do list. Needless to say, if death metal as thick as ten day old blood is in your wheelhouse, this EP is an absolute must.

And another from Maggot Stomp because this label is flying the flag high for gutter death metal, Rotted‘s Dying to Rot demo is a lesson in how to vomit up old school death metal that doesn’t sound like some tired ass rehash. Hear the militant cadence in “Liquefied” or the doom and gloom meets kick-ass finish of “Visions of Decay” for further education. On top of that, Rotted seems to relish in gore with keywords like infected, putrid, deceased, maggots, and corpses just to name a few so they don’t just make nasty death metal, they conjure it with a full package. Again, a four track release but it’s some of the filthiest stuff you’re likely to hear this year.

I don’t know what finally clicked for me regarding Memoriam but Requiem for Mankind is the album I wish they’d made from the beginning. As they say, third time’s the charm. Whatever. Obviously, Memoriam have been mining that familiar Bolt Thrower fame but to no better avail than here. The riffs and drumming seem lifted right from the battlefield, “Undefeated” is a non stop full throttle war ensemble and “Austerity Kills” is like trying to vault a minefield unscathed at full gait. “Fixed Bayonets” thrashes like the all encompassing knife scene in Saving Private Ryan and “Never the Victim” effectively plays on the emotions of the victimized through tone and inflection. No Memoriam album so far has hit harder than this one and no Memoriam album has made peace with the fact that Bolt Thrower is in the rear view as this one has. And for all that, Requiem is a success as well as a barn burner. 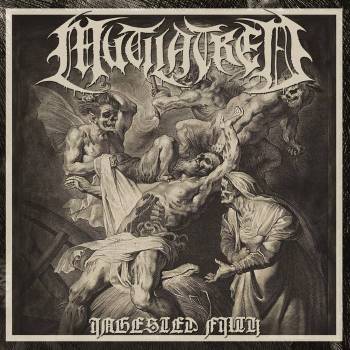 Ingested Filth isn’t the first we’ve heard from Mutilatred but it damn sure is the best, and quickest, to date. 13 minutes isn’t a lot of time but the band doesn’t need much to make their point, “Snap Your Own Neck” dirges and flails like a body painfully and slowly dying while “Torture” lays heavy on the brutal side of death metal. It’s fitting this EP closes with the battering ram of “Scooping Out the Brains” since that’s exactly what this monster does at max volume. Get. Some.

No death metal list, of any ilk, would be complete without some good ol’ crusty Swedeath and that’s exactly what Goregäng‘s Neon Graves provides. It’s nothing new or genre expanding but christ-almighty the weight behind each track is immense and hits harder than an axe to the skull. “Cathedral of Chemicals” teases doom but pulls out the bullet belt and goes for the jugular, “Spray of Teeth” is about as ‘groovy’ as the band gets here but even then it’s heavy as hell, and “This Era of Human” favors Swedeath’s punk side. Goregäng show more faces than just the Swedish variety and it makes for a thrill ride that never gets old.

Some of y’all act like being on Unique Leader somehow pigeonholes artists to a certain brutal sound. Well, I can’t think of a better thing to be pigeonholed to but it misses a lot of intricate details, so shame on you. Disentomb do indeed make brutal death metal that is highly technical in its execution but the results are a fantastic third effort, The Decaying Light. The drumming pummels and the basswork, lordy that basswork, is shred-worthy but more up front than on most releases in this particular vein. It’s to the point of drawing Gorguts comparisons, really. The band doesn’t adhere to rinse and repeat either, the intertwining blasts and groove in “Undying Dysphoria” is a great example of their songwriting ability or take the guttural beat down of “Rebirth Through Excoriation” as an example of how knife blade sharp they can be. There’s not a bad track on the album so feel free to jump in anywhere for a taste.

Now we get to the extreme side of things with Transcend, the third EP, from New Jersey’s Engulf. This EP cozies up to the likes of Vitriol and Kyle Rasmussen guests on one of the tracks so at least you know where their head is at. If you missed the context there, Engulf belongs in the same conversation as Morbid Angel at their best. These four tracks are unhinged in their aggression but expertly handled for full effect – re: the ridiculous guitar work in “From Chasms Deep” or the time shifts in “Birthed Into An Empty Grave” or the infectious nature of personal favorite “Bane of Fire.” This EP is leaps and bounds better than the first two and here’s hoping the next thing we get is a full length as I’m really looking forward to hearing how this translates in longer form. 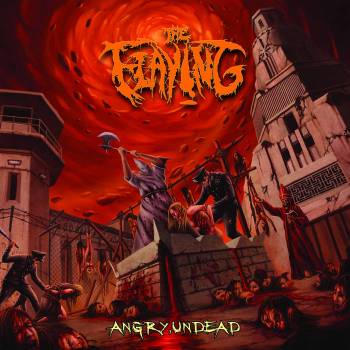 High intensity, warp speed velocity, and head spinning technicality are all things that make The Flaying‘s second outing, Angry, Undead, such a ripper of an album. Those with short attention spans will appreciate the band for never dwelling in one place too long and for splaying themselves all over the map of brutal, technical, and extreme. “Genuflect” kicks like a mule with stutter starts falling just short of breakdowns and “Disloqué” is powerful riff after powerful riff that spirals into controlled mayhem while featuring one of the best melodies on the album. But, the track that really harnesses their wizardry powers, and impressed me the most, is the epic “Angry, Unleashed.” With bass work that pays perfect homage to Cliff Burton and bridges that tease at a more progressive side, this one is a jaw dropper. And on top of that, they still find a way to work in their vicious magic. Who knows if they’ll brush this one off and explore it more on the next album but here, it shines the brightest amongst the group.

I’ll start with a half-hearted apology for this one as you’ll have to wait until Friday to hear it. I know, that’s a pain in the ass but trust me, Wretched Illusions, the debut full length from Creeping Death, is worth the wait. After two successful EP’s, this Texas wrecking crew have put together a debut that sits comfortably in between the swampy caveman and extreme sides of death metal. It’s not overly technical and complicated or trying to be part of the ‘too cool for old skool’ either. This thing is simply a freaking banger from start to finish. It’s thrashy at times (“Bloodlust Contamination”), it pays respects to death metal elders without sounding disingenuous (“Corroded From Within”), and it loves heavy metal (“Captivity”). Attention to detail is at a surplus as well as attention to making damn good songs because Wretched Illusions is full of them.

There you have it, nine amazing death metal albums that have floored me thus far in 2019. I could go on for days with more but, as I mentioned previously, rules are rules and nine it will stay. The best thing is, we’re far from done with this year and there’s so much more to come; Inoculation, Exhumed, Blood Incantation, Coffins, and on and on and on. Anyway, check out these nine, if you haven’t already, and let me know what you would’ve included from the crop we haven’t covered in longer form… I WANT TO KNOW.

One thought on “Nine Circles ov…Death Metal in 2019”