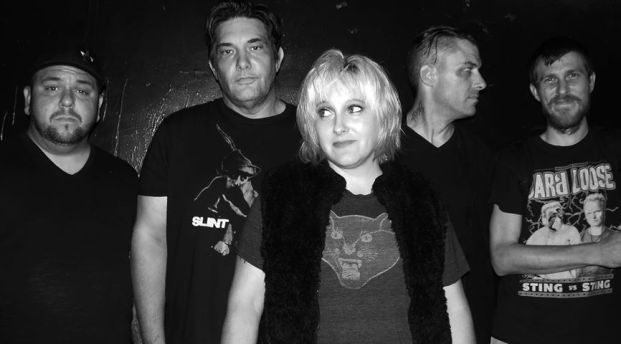 I’ve said it before, somewhere on this very site even, true and real noise rock / metal should elicit raw nastiness and leave an indelible mark on whoever comes in contact with it (by mark I mean the need to go wash off afterwards). And anyone that loves true noise absolutely adores it; lock, stock, and barrel. Ohio’s Night Goat gets it and on their upcoming full length debut, Milk, they careen down a road filled with disease ridden razor blades and gutter brutality but the real key to how big of a success this album will be is their stark conviction and dedication to this particular art form. Its ten tracks are some of the vilest yet beautiful noise these ears have come across in quite some time and we’re honored to feature the following Profile we received from vocalist Julia Bentley. It’s a sincere response and a great look at Night Goat so jump in and don’t forget to hit the links to show them some support. 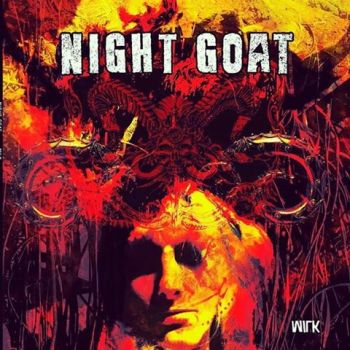 I first got into music as a child, singing in school and band and stuff like that. My brothers were both in bands and playing out at a young age…I always wanted to but wasn’t ready. I started singing in a band as a back up vocalist in 2012(?), where I met my future husband and lead guitarist for Night Goat, Chris Bentley. I went through some really intense, emotionally upheaving things with my family, experienced a huge loss, and had a few breakdowns. That’s when Night Goat began, thanks to Chris pushing me to give it a whirl to just “let go”… and it has been an outlet for the hellfire I have walked through since 2017. It is the best outlet I could have ever asked for.

The experience of performing on stage is so intense for me that I sort of lose myself within the set. For example, bassist Dalin Jones and I collided on stage once and my face hit his bass…blood was spurting out everywhere and I didn’t even feel it. I now have a permanent scar from the incident. I’ve thrown up on myself and pissed my pants a few times from being so worked up during the set, and just carried on!

Some of the great things I see happening in metal right now is the amount of venues that have popped up to accommodate the less mainstream types of music (in Ohio anyways). There seems to be a lot of 2-3 day festivals going on in Ohio where like minded metal musicians all can get together and support / play together on the same bill, selling and exchanging merch, ideas etc., and introducing new music to each other.

The worst thing I can say about the scene is the lack of younger people involved (at least where I’m from). There are some really great musicians and heavy bands, don’t get me wrong. When I was younger it just seemed like there was more passion/angst/outrage driving the scene to stick together as misfits and be different instead of just “swallowing the Kool aid” to fit in the box of what society says good music is. To me, right now is a perfect time for non-conforming youth to create “out of the box” / experimental music with the plentiful avenues available (venues/fests/technological advances) but it seems like the passion/outrage is missing.

Another really big thing that kills it for me is ego. It sucks bad for a band to make it all about them…that’s not what “the scene” is to me…it’s a communal gathering of like minded people supporting each other not tooting their own horn, or stroking their own ego, so to speak. That’s one thing that we as a band are really into, promoting a scene that is supportive so it can GROW.

Up until January, I was a social worker for a living. I am a people person in general. The most important issue for me is equality. Across the board, women/men/children no matter what the color or creed, human rights for wherever you are from. It’s not that hard. Treat other people how you want to be treated and equal access for all. It’s almost 2020, there is no reason this cannot be accomplished (except greed and power, that’s what prevents it from happening in my eyes). I think our music crosses genres and cannot be directly labeled. This makes it something a lot of people can relate to. Every member of our band brings something a little different. Our lyrics are fierce and raw, the issues can be observed in some of the lyrics, if you read between the lines. For example, to me, “Smearcase on Shorb” is about murder and shooting up heroin which is a big problem for a particular area where we are from. “Head Lice” is about someone being gas lighted and told they are nuts by a narcissist, and then they come to and figure out the truth. “Dirty Candy” is about an incident that occurred in a local high school where some teens passed out candy they were told was tainted with LSD to try and dose people intentionally without them knowing. “Chubby Leech” is about someone being stuck in a position where their ideas are constantly stolen, yet they are pigeon-holed and cannot get out of the situation. It’s some pretty rageful and intense lyrics. Put the passion behind it and it’s a recipe for an exorcism onstage!

We were the only kids on the block with MTV in the 80s, so I was exposed to all kinds of stuff at a young age. My older brother Andy got me into metal when I was about 13. He is one of my best pals, and I was “allowed” to follow him and his band friends around to underground shows and practices etc. At one point the steady practice room was an abandoned schoolhouse, LOL. My family is full of musicians and artists, so we were never censored from music of any kind… the family has always been supportive.

Be open minded. Don’t assume anything about a band until they have been heard. Let go of expectations for how one thinks something should be because that’s stifling to creativity. To better serve the genre, continue to be inclusive and not focus on the elite. It’s not a popularity contest, it’s music. Sometimes the underdog just needs the right person to encourage them to bust out onto the scene and not give a care about what others think.

What’s your goal? You guys thinking world domination? Maybe saving a continent? Maybe invading one? Do you guys have day jobs or hobbies you want to share? Whatever it is, please let us know.

The goal of Night Goat is to keep on moving forward. For most of us it is an innate thing that we gotta do to get right, know what I mean? Sure getting signed etc. would be icing on the cake, but we aren’t gonna stop if we don’t.

Chris (lead guitar) and I own a music venue in Canton, OH (Buzzbin), and we are both artists. He’s also an exterminator for public housing.

Donnie Casey is a painter by trade

Unsane (pretty much the entire catalog)

The Jesus Lizard – Down

Neurosis – Through Silver in Blood

Album release date is December 13th, 2019 and planning some regional tours in 2020, working on that now.

Many thanks to Julia for her time!

Milk will be available December 13 on the band’s Bandcamp page. For more information on Night Goat, visit their Facebook page.