Just when thoughts that hardcore strained through a punk sieve hadn’t given us much lately, Kings Never Die show up armed with a four track EP, Raise A Glass, to prove the naysayers wrong. Their hardcore is street tough and metallic by nature, their punk is a bouncing good time that hits on all cylinders. All that plus guest slots from Vinnie Stigma and Mike Gallo of Agnostic Front. Just ahead of this EP’s release we posed our set of Profile questions to the band so keep reading to see how it went down. 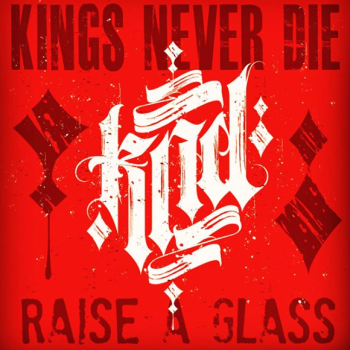 Larry Nieroda (lead guitar): I always fantasized about being able to play electric guitar, even as a child.  Just straight drawn to it for years before I ever even touched a guitar. When I was in high school I met a kid who kept talking about his band at the time and it sounded so cool.  I had to get in a band. Saved up for a guitar and immediately started learning riffs. Sabbath, Priest, Maiden, Scorpions, Metallica. Me and my best friend got guitars and started riffing constantly.  I never put the guitar down. I still play as much as possible. We got some other friends and learned simple cover tunes and practiced weekly. Eventually we played a show and that was it. I was hooked. I just wanted to keep repeating that cycle and I still do.

Steve Gallo (drums): I don’t believe in debasing yourself to get shows or publicity or anything like that. I believe your music or whatever your art is should speak for itself and believing in yourself is the key to exposure and success. Every project I’ve done has been something I believed in and have been proud of.

DN: Totally agree… In fact, I get uncomfortable when KND is even referred to as ex: members this or that. I understand it is a great way to identify with people in bands etc.  But I also think it is disrespectful to those bands unless you still have an active role. Yes, Larry plays in STIGMA still when they perform, I still play USA Dog Eat Dog shows and love doing it.. I play with Eddie Sutton when schedules allow in Leeway NYC as well after writing “Im Your Pusher” together. Bottom line, people will judge Kings Never Die on our material and if they dig it. I think people are way too smart to like a band just because you had played in another years prior. A lot of guys have played in a lot of different bands over the years, especially in the NY & NJ area. Im sure you can understand where I’m coming from.

DN: All good stuff honestly, social media has changed things obviously. Podcasts are one of the strongest media outlets. Brooklyn Blast Furnace and all at Dark Satellite Media. So many great outlets and interesting people doing things their way.  People are interested in old stories, or what’s going on currently… It’s all good stuff and personally love doing them. So many great online zines: In Effect Hardcore, No Echo, Lambgoat, Hardcore Worldwide and so on. Too many to mention.

LN: I like that there’s documentaries and YouTube channels and blogs and banger tv and all this kind of stuff happening… that’s a great thing right now. Worst things? I can’t really think of any? Even in these super divided political times, the metal and hardcore scenes seem not to make it a problem.

DN: I would say songwriting wise, I’ve found myself writing about things that make me feel good, or I think can have a POSITIVE message rather then dwelling in the negative. Whatever comes out from KND is what I or Dylan are feeling when we write the lyrics. Same for the music, a piece of music from Larry, Jay, Steve or myself is an expression of something going on with us. No different. If it makes people react, it’s gold.

SG: Music has always been my only passion. There are a lot of good causes being brought to light these days mostly about acceptance of those that are so called “different” or unconventional. I believe you should always believe in who you truly are (whatever that is) and fuck anyone that won’t accept that. Those people are just afraid to be themselves and look to point fingers to make themselves feel better.

LN: I have an older sister and brother who immersed me in all kinds of rock for as long as I can remember but this was all before there even was “heavy metal”!  I mean metal was being invented at that time and I kinda saw it come out and I got right into it. Judas Priest and Iron Maiden came up when I was a kid and I just loved every note they played back then!

SG: Hard fucking work, never give up. Always look to learn and better your craft. Don’t let anyone or anything get in your way. If you’re feeling what you’re doing, chances are others will feel it too.

DN: Have to agree with Steve, JUST BE YOURSELF and say what you feel. Don’t worry about the reactions of others. Playing music is the same. You create, you of course hope people like it. We can’t get the word out without writers and media outlets, etc. We are at the mercy of the media a bit as artists… but any musician is going to respect a writer that speaks his truth. Even if you don’t like what your hearing or writing about. TRUTH!

DN: Few quick responses. YES WE HAVE DAY JOBS. Gotta pay the bills!! I’ve made almost no money from playing music. Regardless of how many copies or the so called success of the Mucky Pup or Dog Eat Dog. It is frustrating, I feel I’ve written a bunch of songs and a lot of which people know, but never received a dime of publishing money on any one of them!! A CULT?? No thanks. Settle for people giving our band and what we are creating a listen and let people decide for themselves. GOALS? Enjoy the time with the guys, keep writing together, keep the shit real and let people be themselves.  Hope people dig it and want to see us play, listen to the band, etc. Not much more you can ask for.

LN: Wow.  I mean anything I can get away with really.  I just want to go to where they’ll have us and people want to see what we’re doing, Europe of course, USA, Japan, etc. get great shows, a few great tours a year, continue to make and supply music…if we can do that, there’s your world domination and it’s good enough for me! I’m good with that.

SG: I listen to a lot of different shit and I still listen to the classics. I like Susan Sundfør a lot, she’s got a killer voice and a great original sound. Amy Winehouse I listen to often.  Thin Lizzy is always something on mine and Larry’s steady rotation and one of the greatest bands of all time in my opinion. The Cure, the Cult, the Dead Boys are among my favorites.

DN: You’re right. I am always obsessing over what I or we are currently writing. When not doing that, Im on a steady rotation of Sick of it All, Wisdom and Chains, Agnostic Front’s new album is insane, I love driving to Murphy’s, both (LAW and Drop Kick, Madball, Biohazard, LOA, still love the beat of some of The Doors, love newer bands, Regulate, Turnstile, etc. so many to name. I’m all over the place honestly!

DN: Raise A Glass will be released Jan 24 on UPSTATE Records along with BlocGlobal & Traffic Distribution. All great people and so grateful we are all working together. The title track will feature Vinny Stigma and Mike Gallo from Agnostic Front on most of the vocals. We love the track and are so grateful we were able to do it with them. An honor!! Also, first single “Before My Time.” Of course, the other two tracks are bangers, “Never Know” and “The Juice.” I think the EP is a great start and shows a taste of what we are capable of and shows the shape of where we’re going. We have an immediate run right after the release. NJ, NY, PITT, OHIO, MILWAUKEE & Detroit. Playing with great bands: Murphy’s Law, Madball, Leeway, etc. Otherwise, looking to play pretty consistent, wherever they will have us. The follow up album is completely written and ready, but we obviously need the finances to record that. We know who will be producing with us already. Just gotta connect with a proper European partner label that believes and wants to help make all this happen so we can keep it rolling.

LN: We are just trying to get as much done as possible.  We got a lot to do…more than there’s time for. Just don’t forget us and check in with Kings Never Die from time to time. Instagram will be the main way. When you sleep, we creep!

Many thanks to Kings Never Die for their time!

Raise A Glass will be available January 24 on Upstate Records’ Bandcamp page as well as all major streaming outlets, and on vinyl February 7 via Upstate Records. For more information on Kings Never Die, visit their Facebook page.