2015 was a weird one for me. I’m still very new around these parts, but some of you may know me already. I had a very transitional first half of the year where I lost a long term job, I left my native homeland and I moved to pastures new for what turned out to be a buttload more opportunity in both my work life and my social life. Nottingham played host to some truly killer shows this year! But throughout the ups and downs the almighty riffs of years past kept me all warm and tingly inside, and as a consequence of upheaval it wasn’t until the second half of this year that I really began to experience new material. Some of the following gems landed quite late on in the past twelve months, but don’t let anybody ever tell you that this year was a slow one for the good stuff. 2015 was indeed “rad times” in musically heavy terms, so here’s my favorite nine releases of the year…

It took me a while to get into this one, but it obviously eventually clicked. And due in no small part to the persistence and diligence of Josh who I feel was smart enough to believe that my mind would change. What I got in return was one of the most outright aggressive albums of the year, a full on death metal blitzkrieg that takes no prisoners. One of Rutan’s finest hours.

Philadelphia’s Jesus Piece wound up dropping a vicious EP of pure fight music back in August. As per usual this here boy was late to the party, but their blend of tough hardcore, noise and slam was a real highlight of my year. They’re completely vicious and I really hope that their future holds nothing but scary and bright things for them. Do not sleep on this.

I’ve very recently rabitted on about this French doom act here so I won’t waste any more of your time. Needless to say, this rules.

The sound of working class England righteously pissed off and under the thumb of the current regime. This is a great combination of sludge and hardcore punk, bursting at the seams with pure vitriol. It also helps that they’re jolly nice chaps when not on the clock.

They came (d)ripping back in classically morose fashion. Four tracks of melody-tinged funereal doom so squalid that you’ll probably need a shower afterwards. Relapse had a banner year in 2015, and this was the pick of the bunch for me.

What an album, even by their lofty standards. Most likely the most forthright rocking effort since Robot Hive, it will sink it’s hooks into you from top to toe. It made me shake my ass like I knew rhythm was going to be outlawed before year end. A real triumph.

A very different affair to Ultraviolet, which I adored but really seemed to polarise the opinions of everybody. This time around they have retained the more melancholy elements of that past LP whilst peppering more of those bigger psychedelic riffs that brought them to the dance in the first place. I’ve had this on repeat since I managed to pick it up. And if this does persuade you to do the same then try to get the special limited edition first pressing for this beauty, which some would call blasphemy but I love that they make it their own. So suck on that.

Full disclosure: I never managed to get into Cattle Decap until this album. And it wasn’t for lack of trying either, even with the last critically lauded one. For some reason they just never seemed to land with me. This time however you people just wouldn’t shut up about them so I took a punt on The Anthropocene Extinction and it was indeed a revelation. It destroys on all possible levels, with a degree of musicianship that leaves most other death or grind bands in the dust. Completely bonkers, and wonderful.

1: Will Haven – Open The Mind To Discomfort 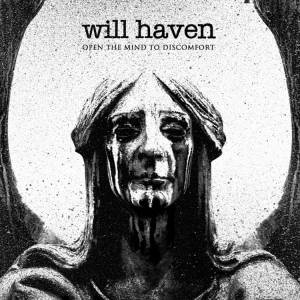 Just phenomenal. Without a doubt the heaviest thing they have ever recorded and most certainly the band’s best effort since Carpe Diem. It’s not particularly long by any stretch, but the instrumental interludes are by no means filler. In fact, the “proper” tracks are all the more enhanced for their existence. Avenell’s voice has never been recorded better and the whole thing is in a near constant state of unrest, of which surely the album title is an allusion to. Desolate, beautiful, glorious and heavy as balls. My personal album of the year. Accept no substitutes.

On a side note, I caught them live a few months back and they were on the best form I have ever witnessed them be in. Also, this spontaneously happened: