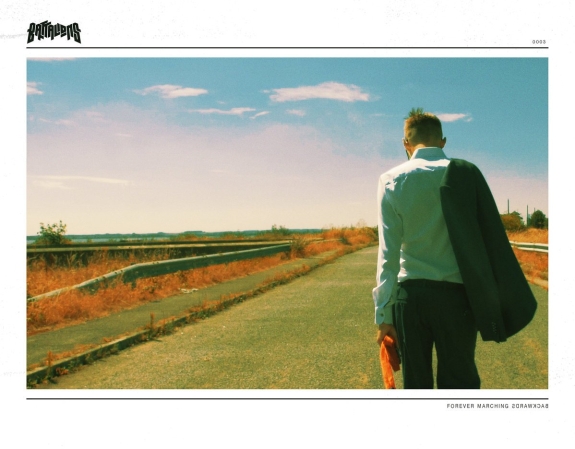 Why yes, I am aware it’s Saturday and there’s no Playlist. My fault totally, I forgot to ask the gang their picks for the week – sue me. But we’ve got one hell of a great track in store today via the UK’s groove laden riff mongers Battalions. They’re not a new band but you already knew that right? Riigghht. Anyway, they’ve been around now for roughly eight years and have a pair of wicked albums under their belts. So what’s new and why the mention? Glad you asked. They have a new album, Forever Marching Backwards, due out November 30 via APF Records and recently released a video for the title track which is what we will be taking a look at for this edition of Visions ov Hell. Happy Saturday and long weekend.

If by some chance their earlier efforts, Moonburn or Nothing To Lose, slipped through the cracks, the links are there for discovery. Behind those links lies dirt infused sludge metal with a penchant for grooving riffs and larger than life low end frequencies. Since I’ve yet to hear the new album in full, “Forever Marching Backwards” is a good indicator that the band is treading these same waters but have tightened their delivery in not only the songwriting department but their playing as well. Divert your eyes and ears directly below to get a taste.

Leading into the track Pete Cross showboats his guitar abilities and instantly got me interested, as is so often the case with this band. But then Battalions do what they do best which is slap the sillies away with Phil Wilkinson’s caustic hardcore screaming while the rest of the guys work you into a slow head nodding frenzy. That’s what I’ve always liked, they’re not subtle in how they swing hefty riffs around nor in the way the vocals could wake the dead from an ancient slumber.

The visuals are the linchpin of this album’s theme: how society follows blindly without questioning motives. Lots of walking in this thing, on a road and through a decrepit building, as our subject is led, blindfolded and by a hooded unknown, to an isolated room. When the blindfold is lifted the band has just hit a d-beatish stride and Wilkinson is screaming the words right into our subjects face. Nose to nose. Imagine his surprise since we have to assume he’s probably never even heard metal. This is yet another facet of Battalions that has always been a plus: their dark humor and it’s here, in the look of shock from our subject, where they show it off. Based on this track I’m excited for the rest of the album and excited to see just how much they’ve grown over the past year.

Available November 30 on APF Records, Forever Marching Backwards was recorded and mixed by Chris Fielding at Skyhammer Studio. Today’s video for the title track was done by JWA Creations and the single can be purchased here and here. For more information on Battalions, visit their Facebook page.