Blood Command formed in 2008 and have went to great lengths to experience, through the modicum of their sound, damn near every genre out there and have done so with the kind of unfettered realness we generally never get to see. Meaning, it gives many fans that place to go when they don’t fit in to some specific thing or genre or frame of mind in general. Their self tagged ‘Deathpop’ is fitting since they’ve actually done death metal but dance the edges of melodic pop punk, among so many other things, in an effort to get listeners to just have a good time and forget all the ills of the world and whatever they might be going through at the time. Music has that power and Blood Command wields it with impunity, particularly so on their upcoming EP, Return of the Arsonist. I dare you to listen and not sing along to those choruses, just sayin’. Ahead of this EP’s release we reached out to guitarist Yngve Andersen with our set of Profile questions and he was generous in offering their backstory and some blistering takes so head below for how it went down. 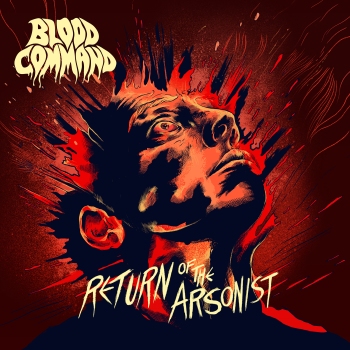 I got into skateboarding when I was a kid. I sucked but it got me into punk music because of the music in the skate videos and in the local skate hall. My family moved to a house where there was a bass guitar in the basement, so because of a lack of anything else to do than skateboarding in my new area I started to learn to play instruments, and play shitty Ramones covers with my new friend and his brother who played guitar and drums. I’ve never searched for the famous rockstar-thing. I’m from anti-rockstar culture. I just want my songs to mean something to someone and It seems that it has so I’m very happy.

We were supposed to play Live At Leeds many years ago. It was a one-off show, so we had to fly from Norway. One band member swore you didn’t need a passport to go to the UK from Norway because of the Schengen Agreement (which the UK never have been a part of). So obviously they were held back and had to go home to get the passport and take a plane that departed later. This made us miss our original slot, but the festival was helpful and arranged for us to play another stage later that night so we could wait for our last band member.

However; a guy from my school who I hadn’t seen in over 10 years had moved to Leeds and heard that I played in a band now and wanted to check out my success. He waited with me the whole day. Asked me every 30 minutes if we were on soon and of course, started to doubt as the hours went by. It was finally our turn. The band before us had just finished …and then the venue closed instantly. We never found out what really happened, but I guess there was some major miscommunication there. One thing was all the money we had flushed in the toilet on extra flights and stuff, but the worst was the shame I felt towards my old classmate. He must have believed I was lying about playing in a band.

It seems like it’s less of the djent and Slipknot-Atilla-esque bands (bands that are not ashamed to use EMG-pickups in their guitars) and more bands who play pure thrash or punk or whatever. That’s really beautiful. Maybe that’s just wishful thinking from my side, but I believe it is true.

It is very important, and hopefully it will cause change where it’s needed, but our role in that whole circus is to question everyone and their intention to say what they say. I do believe many narcissists would say whatever to make people look up to them, and would take advantage of any trend to lift themselves in the eyes of others, though they couldn’t care less about the actual case. I don’t trust anyone when it comes to that. In Norway there has been a trend about “coming out” with their anxiety or other mental health problems, and it’s always the super popular ones who have success and friends and everything. Do you think that is healthy for the ones having nothing and have real anxiety? No! Quite the contrary. Makes you feel less, I guess. They have the same condition as you, but they make things happen and you don’t. Hurray! Now I feel so much better. If you read our lyrics this shines through in many of the songs. The hate for the fake.

My oldest brother was (and still is) into 80s heavy metal, so I got a lot of that growing up. I used to sneak into his room and listen to his rock records while he was at school, but everything really started to happen when he got his hands on Sellout Volume 1. from Christiana Rock Records. My family was used to it and I didn’t get any crap for it. However, my mother stood outside when I played my first proper rock show ever and warned others about going in, because she thought there was something demonic about the headbanging. So, there you have that.

Don’t review your friends or someone else you hang out with. It’s the dumbest thing ever. No one will take the review seriously or anything you post at a later point. You’re ruining it for everyone. Don’t jump on trends. Don’t hurt bands just to hurt them because they’re the new ‘cool’ band to hate, don’t praise bands just to praise them or impress/befriend them. They have to deserve it either way. If you write about music, you should take that very seriously and don’t use it to be cool or whatever. Those people can burn in hell.

Cult. We have one. Our members are called the awaketeam. Make this cult the most dangerous cult on the planet. That’s our goal.

We are about to release our EP Return Of The Arsonist on April 12th. Norwegian and Swedish headliner shows in April/May and we’re going on a European tour with Skindred at the end of the year. And we have just recorded our upcoming album. The music at least. Will use the summer for writing lyrics for it. It may see a release in 2020 sometime.

Summarize your band in exactly one word. (Disclosure: If you include additional words, we will select our favourite for the final publication.

Many thanks to Yngve for his time!

Return of the Arsonist will be available April 12 on Fysisk Format. For more information on Blood Command, visit their Facebook page.