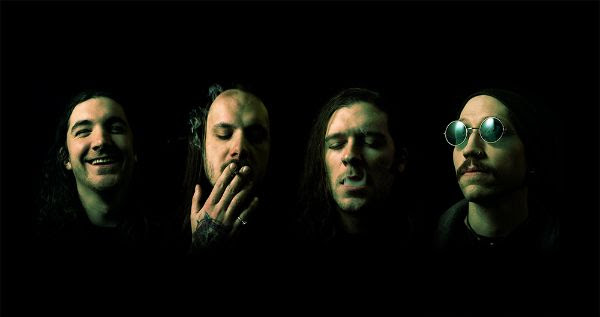 To be clear, Leather Lung themselves are not seedy. However, their take on southern, whiskey soaked sludge meets the swing of delta blues is. Their upcoming album Lonesome, On’ry and Evil, tip of the hat to Waylon in case you missed it, is the band’s third effort and over the course of their last two they projectile vomited weed filled jams and caustic sludge that would make both Bongzilla and Eyehategod proud. And now, they’ve really come into their own with better, catchier songwriting and an unmistakable swagger that makes this one an easy highlight. Just ahead of the album’s release we had the chance to pose our set of Profile questions to the band so stick around to see how it all went down. And, be sure to hit that preorder while you’re here. 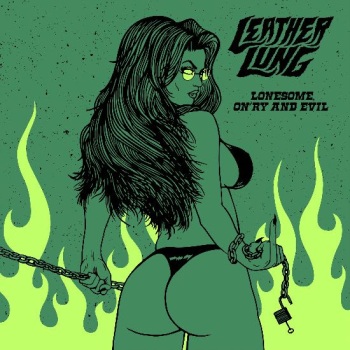 How did each of you first get into playing music?

Mike (vocals): Some of my first memories are entertaining my family with song and dance performances of “Achy Breaky Heart” by Billy Ray Cyrus. The power of entertaining through music has resonated with me ever since.

Zach (guitar, backing vocals): I actually didn’t start playing the guitar until I was about 19 years old.  At the time, we were going to a lot of DIY basement shows in the Boston area and we eventually reached the point where it wasn’t enough to just watch the bands play, we wanted to get more involved with the local music scene and contribute to it.  So, I borrowed a guitar from an old girlfriend, started to make sense of it and eventually started writing songs along with Jesse and Mike.

Jesse: (bass, backing vocals)I remember driving to the city to hang out with Mike and Zach. Mike called me on the way there and said: “We’re forming a band and you’re gonna be in it.” I agreed immediately although I may not have had a choice. I asked what I played and he responded “bass.” Now we’ve been making noise together for over a decade.

Ben (drums): I played piano growing up and my dad plays a lot of music. I started playing drums 6 or 7 years ago and it was just something I knew that I loved right away.

What, or who, got you into metal and how old were you? How did your family and friends feel about it?

Mike: I fell in love with Black Sabbath the first time I heard “Iron Man” come through the speakers of my Dad’s pickup truck. I didn’t know music by genre then, I just knew how it made me feel and that I needed it.

Zach: My dad always had an eclectic taste in music. He introduced me to bands like Queen, The B-52’s and even Type O Negative once I was a bit older but it wasn’t until I was about 12 or 13 that I really started to explore metal and heavy music on my own. I’ve always had the attitude of “I like what I like.” so when I started to connect with these heavier bands there was almost no hesitation. It just made sense to me.

Jess: The first real metal/hardcore show I ever went to I was 15. There was no stage, no security, and a bunch of rowdy looking people. I got elbowed in the face and got a black eye about 3 seconds into the first band. I’ve been hooked ever since.

Ben: My dad loves metal and showed me Black Sabbath when I was a kid. He also loves System of a Down and all that stuff, so I just kinda absorbed his taste in music.

It seems that now everyone has a passion for some cause and that those people are very open about displaying their passions. This is probably a very, very good (and progressive) thing socially. What are some of the most important issues (social/political/humorous/etc.) for you, and how do you insert those issues into your music?

Our music is an extension of who we are as people. Leather Lung is a raw look into the lives of its four members and nothing more than that.

What’s your goal?  You guys thinking world domination?  Saving a continent, or invading one? Planning to start a cult?  Tell us what you’re aiming for with this band.

We are not special. Many people have seen what we have seen, felt what we have felt, and experienced the same up-and-downs that life throws your way. And it’s through that shared sentiment we aim to make a genuine connection to the listener.

What’s the most you’ve ever debased yourself to get your band onto a show, into a magazine or otherwise promoted, covered, and praised? (If you don’t have a story, how about a funny/embarrassing story about the band.)

A lot of our values are drawn from the punk/hardcore scene in which we grew up in. We try and not take ourselves too seriously, but debasing ourselves would go against the integrity in which the band was built upon.

If we are embarrassed about anything, it might be having to have a Facebook. It’s not our preferred platform to reach people but the costs of not having one ended up outweighing our personal desires to avoid it.

Interesting day jobs or hobbies you want to share?

What do you see as some of the great things happening in metal right now?  What are some of the worst?

There is a revival happening in Death Metal right now that has spawned some amazing newer bands. Gatecreeper, Tomb Mold, Necrot, to name only a small few. These bands pay respect to the sounds the genre was built on while simultaneously incorporating newer approaches to it. That’s the kind of evolution any genre can hope for.

Being professional and timely in your correspondence is one of the best ways to show a hard-working musician respect.

What is the 12-month outlook for you or your band?  Any specific events on the horizon that the masses should be aware of?

We have a new record entitled “Lonesome On’ry and Evil” coming out August 23rd. We are going to play out as much as we can following its release. Our touring schedule is as follows:

Many thanks to Leather Lung for their time!

Lonesome On’ry and Evil will be available August 23 on Magnetic Eye Records and the band’s Bandcamp page. For more information on Leather Lung, visit their Instagram and Facebook pages.